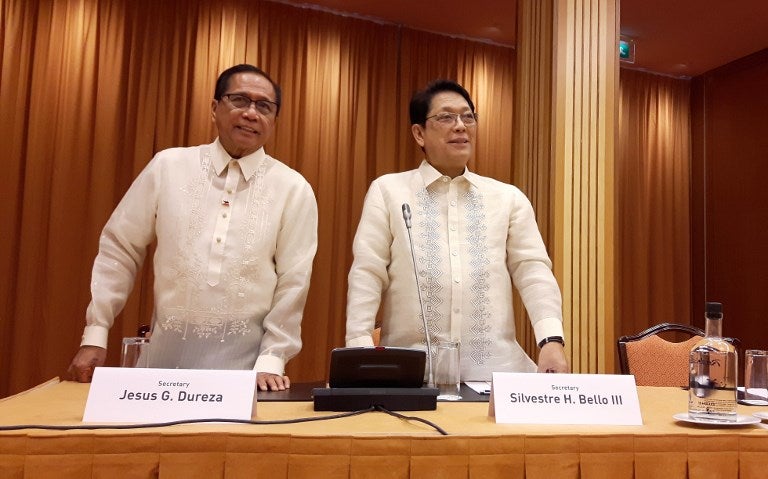 Presidential Advisers on the Peace Process Jesus G. Dureza (left) and Silvestre H. Bello III take part in a meeting as part of the peace talks between the Government of the Philippines (GRP) and the NDF organised by the Dutch government on April 2, 2017 in the Dutch town of Noordwijk aan Zee. Dureza on Sunday, May 28, 2017, formally called off the latest round of talks after the communists refused to recall an order to attack government forces. AFP

NOORDWIJK AAN ZEE, Netherlands — The Philippine government on Sunday formally called off the latest round of peace talks with communist insurgents after the parties failed to resolve a dispute over a rebel order for fighters to step up attacks.

“We are maintaining the decision made not to participate in the fifth round of talks,” chief government negotiator Jesus Dureza told journalists after almost 10 hours of closed-door consultations.

“There are no compelling reasons for us to change the decision… which we announced yesterday,” he said, adding that Manila was “formally” withdrawing from the round.

It was the fifth scheduled round of talks since the resumption of formal negotiations between Manila and the communists in August.

They were meant to address such issues as a joint interim ceasefire, social and economic reforms and human rights issues.

The breakdown of the talks, held in a scenic Dutch seaside resort, came as fighting flared Sunday between Philippine government forces and Islamist militants in the south, with the death toll nearing 100 after almost a week of fighting.

Talks stalled Saturday when Dureza objected to the communists’ telling guerrillas to intensify attacks in response to President Rodrigo Duterte’s declaration of martial law in parts of the country.

Dureza said Sunday that the talks would not resume until there were indications of an “environment conducive to achieving just and sustainable peace”.

Asked whether this included the communists’ order to escalate attacks, Dureza said: “It is a factor.”

“The peace talks have not been cancelled and the peace process remains intact,” added Elisabeth Slattum, special envoy of Norway, which has been facilitating the peace talks.

Duterte declared martial law on Tuesday across the southern third of the Philippines to quell what he called a fast-growing threat from terrorists linked to the Islamic State group.

Communists insurgents, who are active in wide areas of the archipelago, including the south, responded to Duterte’s declaration by ordering their own forces to “carry out more tactical offensives”.

Chief rebel negotiator Fidel Agcaoili said the communist negotiators had “recommended to our leadership to reconsider the order, but that takes time”.

He said the NDFP, a coalition of several groups of which the Communist Party of the Philippines (CPP) is among the most prominent, “deeply regretted” Manila’s decision to shelve the talks.

In a statement the NDFP lashed out at Dureza’s comments on the order, saying it “totally obscures the fact that the government has been waging an ‘all-out-war’ against” the New People’s Army (NPA), the CPP’s armed wing.

It added that Duterte’s declaration of martial law in southern Mindanao “is bound to further escalate the armed conflict, aggravate the human rights situation and exacerbate the suffering of the people”.

The communists’ own insurgency which began in 1968 in the poverty-stricken Asian country is one of the longest running in the world, and has claimed an estimated 30,000 lives, according to the military.

Peace talks have been conducted on and off for 30 years, and were revived after Duterte, a self-declared socialist, was elected president last year.

Norway had coaxed the two sides back to the negotiating table in August, but little progress has been made since then.

The talks moved to Noordwijk aan Zee, about 70 kilometers (45 miles) from Utrecht, where several of the rebel leaders live in exile.

The fiery Duterte has taken strong positions against the rebels, imposing conditions including that the guerrillas stop extortion and arson activities.

Duterte angrily called off the peace talks in February after the collapse of unilateral ceasefires that saw the guerrillas killing several soldiers and police in a series of attacks.