Peace talks break down after communists order NPA to attack 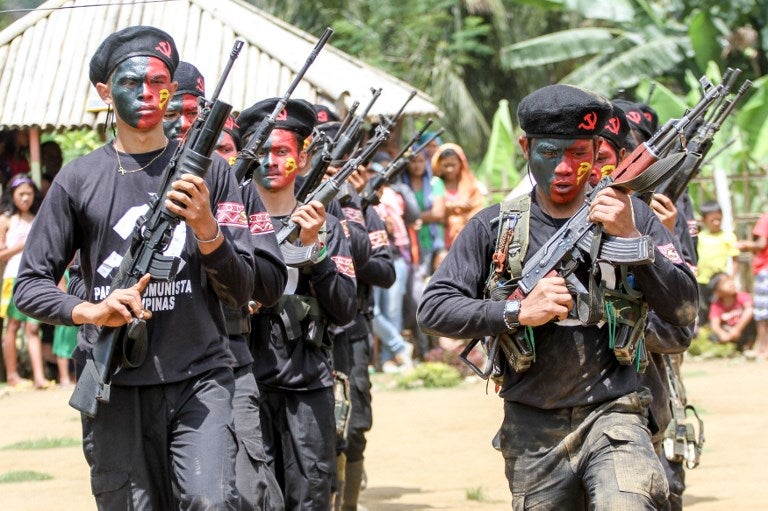 New Peoples Army rebels, the armed wing of the Communist Party of the Philippines, march during the turn-over ceremony of captured government soldiers to officials and peace advocates in the hinterlands of Matanao town, Davao del Sur province, in southern island of Mindanao on April 19, 2017. AFP

NOORDWIJK AAN ZEE, Netherlands — Peace talks between the government and communist insurgents broke down on Saturday after a dispute over the rebels’ ordering their fighters to step up attacks.

But communist negotiators remained hopeful that the discussions being held at a seaside resort town in the Netherlands would continue, despite the suspension announced by government negotiators.

The two sides had just opened formal talks when chief government negotiator Jesus Dureza objected to the communists’ telling guerrillas to intensify attacks in response to President Rodrigo Duterte’s declaration of martial law in parts of the country.

“The government panel is now left without any other recourse but to announce… that it will not proceed to participate in the fifth round of peace negotiations,” he said.

He added that talks would not resume until there were indications of an “environment conducive to achieving just and sustainable peace”.

President Rodrigo Duterte declared martial law over the southern third of the country on Tuesday to quell fighting with pro-Islamic State group militants in a southern city.

Communists insurgents, who are active in wide areas of the archipelago, including the south, responded to his declaration by ordering their forces to “carry out more tactical offensives”.

This was despite an assurance by Duterte — relayed by government negotiator Silvestre Bello — that the Mindanao martial law was not against the NPA, the NDFP, a coalition of several groups, of which the Communist Party of the Philippines (CPP) is among the most prominent, said in a statement.

“The facts on the ground belie the clarification made by Bello,” it added.

Senior rebel negotiator Luis Jalandoni said that despite the government’s ultimatum, the guerrillas’ attacks would continue.

Government negotiator Silvestre Bello said the rebel panel had originally asked for a 10-minute recess to discuss the government’s threat but refused to return to the table afterwards.

But chief rebel negotiator Fidel Agcaoili told journalists he was hopeful the talks could resume, despite the government’s suspension.

“The talks are not closed,” Agcaoili said.

“Of course we intend to sit down again, the two panels, and then perhaps find some constructive solution between the two of us to continue the fifth round of talks.”

If a solution could be reached, the talks “could resume tomorrow,” said Agcaoili, chief negotiator for the NDFP said earlier.

The CPP’s armed wing is the 4,000-member NPA guerilla unit.

The communist insurgency in the poverty-stricken Asian country which began in 1968 is one of the longest running in the world. It has claimed an estimated 30,000 lives, according to the military.

Peace talks have been conducted on and off for 30 years, and were revived after Duterte, a self-declared socialist, was elected president last year.

Norway had coaxed the two sides back to the negotiating table in August, but little progress has been made since then.

The talks were moved to Noordwijk aan Zee, about 70 kilometres (45 miles) from Utrecht, where several of the rebel leaders live in exile.

The fiery Duterte has also taken strong positions against the rebels, imposing conditions including that the guerrillas stop extortion and arson activities.

Duterte angrily called off the peace talks in February after the collapse of unilateral ceasefires that saw guerrillas killing several soldiers and police in a series of attacks.

Read Next
Top UN climate exec to address Manila gab
EDITORS' PICK
Quarantine violations still punishable despite deleted provisions in ‘Bayanihan 2’ – Bato dela Rosa
‘Puno na lahat:’ Metro workers brave lack of public transport, rains on Day 1 of GCQ
Leveling up your ‘lutong bahay’ with the kitchen companion you never knew you needed
Someone from the Philippines can become $356 Million richer this Tuesday
BFP raises general alarm over Mandaluyong fire
Cherry Mobile teams up with Cloud Panda PH, launches online store
MOST READ
‘If I had not been SolGen, I will make you eat your words,’ Calida tells Coco Martin
51 percent of German firms holding back investments in PH, but not because of COVID-19
5 car dealership outlets shutting down
BFP raises general alarm over Mandaluyong fire
Don't miss out on the latest news and information.