Gov't: Peace talks with NDF to continue in the future, but ... | Global News
Close
menu
search

Gov’t: Peace talks with NDF to continue in the future, but … 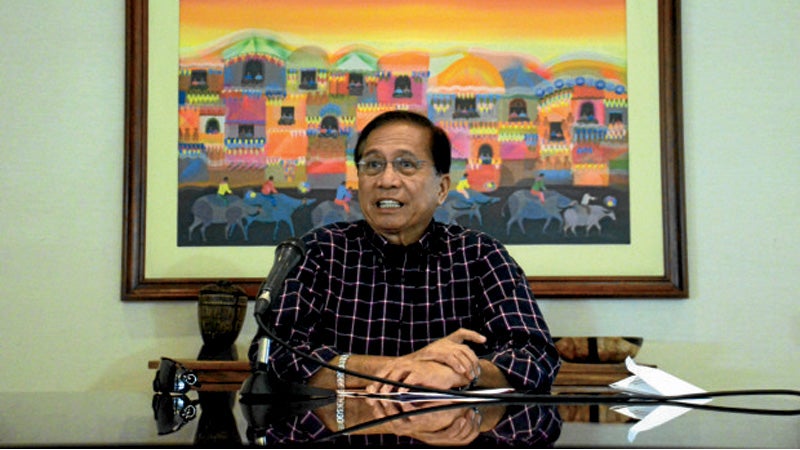 THE NETHERLANDS – After withdrawing from the 5th round of talks with the National Democratic Front (NDF), the government panel said the negotiations were still on but the next round of meetings would depend on whether conditions on the ground would improve.

The government maintained its position not to participate in the latest round of talks after the Communist Party of the Philippines (CPP) ordered the New People’s Army (NPA) to attack government forces implementing martial law in Mindanao against Islamist terrorists.

In a late night press conference on Sunday at the venue of the scheduled talks in Noordwijk, Presidential Adviser on the Peace Process Jesus Dureza announced the latest directive from President Duterte.

“The negotiating panel of the Government of the Republic of the Philippines is maintaining its decision not to participate in the 5th round of talks with the Communist Party of the Philippines/New People’s Army/National Democratic Front,” Dureza said.

The development doused the already warm mood and atmosphere on Sunday morning during the informal panel to panel meeting and mass which was attended by both parties.

The talks, which was originally scheduled to begin on Saturday, was put on hold after the government presented a written position to the NDF during a closed door preliminary meeting not to participate in this round.
Dureza earlier explained that position was a result of the “blatant defiance” of the communist movement to martial law in Mindanao.
Martial law on the entire island of Mindanao was declared by President Duterte last May 23 after heavy fighting erupted between government forces and the so-called Maute group in Marawi City.
The CPP then ordered the NPA to attack government forces implementing martial law.
NDF senior adviser Luis Jalandoni explained that the order to attack was not intended to undermine the negotiations but was a response to a statement of Secretary of National Defense Delfin Lorenzana that the NPA was a targets of martial law.

Lorenzana belied the claim of Jalandoni while pointing out that the NPA was not a target of martial law military operations.
Peace panel chair and Labor Secretary Silvestre Bello echoed Lorenzana, adding that the current direction of the Duterte administration was to seek peace political settlement with the communist movement.

NDF chief political consultant Jose Maria Sison disclosed that the peace panel had recommended to the CPP to reconsider its latest directive to the NPA.

But the NDF explained that it would take some time to communicate and fully implement the new directive considering the guerrilla character of the forces on the ground.

Sison added that the communist movement was one with the government in opposing and fighting terror groups that pose threat to civilians and communities.

From Saturday afternoon to Sunday, both parties rushed to explore all possible solutions to resolve the problem.

Optimism was high after the parties met in a small group backchannel meeting on Sunday morning, which was followed by information that the fifth round of talks might commence in the afternoon.

The fate, however, would depend on the communication and latest directive from President Duterte.

Apparently, after serious deliberation and discussion between Dureza and Duterte, the government decided to maintain its original position.

“There are no compelling reasons for us to change the decision that have been arrived and we have announced yesterday,” Dureza said.

Dureza explained that they observed no changes in the situation on the ground referring to the existing directive of the CPP.

He added that existing mechanisms remain in full effect including the Joint Agreement on Safety and Immunity Guarantees (JASIG) and the Comprehensive Agreement on Respect for Human Rights and International Humanitarian Law (CARHRIHL).

NDF chief negotiator Fidel Agcaoili said that the decision of the government would mean a delay in the reforms that both parties were pushing for.

“This setback will definitely be a big one in terms of hastening the forging of agreements on social and economic reforms,” Agcaoili said.

Despite the non-participation of the government, both parties continue to express their commitment to pursue the peace process.

“What is clear is that we are withdrawing from the fifth round but we are not terminating the talks,” Bello said.

Meanwhile, Agcaoili noted that both parties did their respective best to try and continue this round of talks.

“We are eager to resume the talks now. It is their decision not ours to withdraw from the talks,” Agcaoili said. CBB/rga