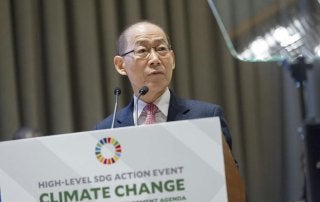 Leaders of civil society, government and the international community will gather for a three-day consultation to help define a Philippine roadmap that will enable the country to fulfill its obligations under the Paris Agreement and provide transition to a climate economy.

Dr. Hoesung Lee, chair of the United Nation’s Intergovernmental Panel on Climate Change (IPCC) and Sen. Loren Legarda, UN champion for disaster resilience, will keynote the opening of the “Tripartite Conference on the Philippines Roadmap for the Paris Accord,” to be held at the Manila Hotel on Monday.

This was jointly announced Friday by Heherson T. Alvarez, former senator and chair of the Climate Change Commission and former senator and local government secretary Jose Lina Jr., conveners of this first national climate change conference after President Duterte signed the Philippine accession to the landmark Paris Agreement in March.

The IPCC is the lead UN body whose comprehensive report in November 2014 had provided the crucial inputs into the Paris Agreement adopted in December 2015.

It was awarded the Nobel Peace Prize in 2007 jointly with former US Vice President Al Gore Jr. for helping disseminate knowledge on climate changes and the steps that need to be taken to counteract those changes. The IPCC was established by the United Nations Environment Programme (UNEP) and the World Meteorological Organization (WMO) in 1988 to provide the world with a clear scientific view on the current state of knowledge in climate change and its potential environmental and socio-economic impacts.

“We are deeply honored and encouraged that Dr. Hoesung Lee has deemed it important enough to join us in this effort in spite of the tremendous pressures of his office,” Alvarez said, noting that the IPCC head also attended the first climate change conference in Asia-Pacific that he organized in 1995 as chair of the Senate committee on environment. Lee was one of the scientists representing IPCC at that meeting.

“Dr. Lee will be sharing his insights that will be invaluable to the Philippines and the Asean region as we rethink our development plans and shape strategies to achieve our Nationally Determined Contributions (NDC) under the Paris Climate Agreement,” Alvarez added.