Malaysian is next in line for IS-inspired terrorists in Mindanao 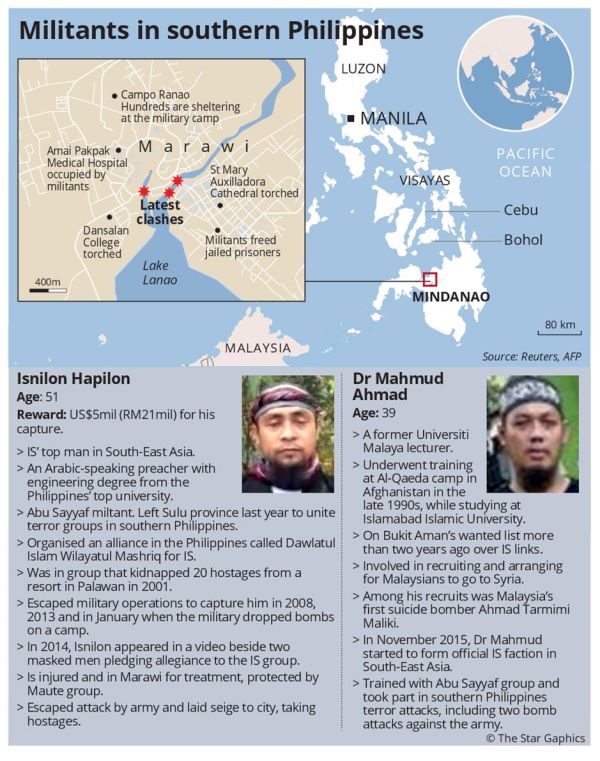 KOTA KINABALU, Malaysia—Malaysian lecturer-turned-militant Dr. Mahmud Ahmad could soon be the leader of the Islamic State’s (IS) offshoot in Marawi City.

He is believed to be holed up in the city where the army is battling the Maute group, which has seen 44 people, including two Malaysians, killed.

Dr. Mahmud has been identified as the next man to create a bastion of IS in South-East Asia, now under the command of Abu Sayyaf leader Isnilon Hapilon.

Isnilon was declared as the Emir of the IS forces in the Philippines early last year but he was reportedly badly injured in an aerial attack on Basilan about two months ago.

Dr. Mahmud led fellow militants to rescue Isnilon in the Marawi attack, said sources, adding that they believe he is also trying to fill the vacuum in leadership of the caliphate if Isnilon is confirmed dead.

They said IS caliph Abu Bakr al-Baghdadi is desperately trying to find a new leader in the South-East Asia faction that was once headed by Muhammad Wanndy Mohamed Jedi, who was killed in a drone attack in Raqqa, Syria.

The sources said Dr. Mahmud, also known as Abu Handzalah, is now the only trusted lieutenant linked to Baghdadi besides the injured Isnilon in southern Philippines.

They said there were number of foreigners – Malaysians, Singaporeans and Indonesians – in the Maute group comprising mostly Filipino Christians who converted to Islam.

Intelligence sources said Dr. Mahmud’s plan was to form an official IS faction in South-East Asia by uniting different terror cells in Malaysia, Indonesia and the Philippines.

According to the sources, they could not estimate the number of Malaysians in the area but believe many foreigners are with the militant groups, including Abu Sayyaf in Mindanao and Basilan.

Philippine officials have yet to disclose the names of the militants killed in Marawi City where intense battles are continuing with the Philippines military trying to recapture parts of the city held by the militants since Tuesday.

The sources had identified the two dead Malaysians as Ustaz Abdurahman Asmawi from Kelantan and Dr. Kamsa Yahya from Kedah. It could not be immediately established if the two were involved with the militant group or were visiting the city.

Among others killed were an Indonesian and a Saudi Arabian, the sources said, adding that nine were Filipinos.

Dr. Mahmud, who trained at an Al-Qaeda camp in Afghanistan under Osama bin Laden while studying at Pakistan’s Islamabad Islamic University in the late 1990s, had returned to Malaysia to lecture at Universiti Malaya.

After being exposed as an extremist militant by Bukit Aman in 2014, he fled to the Philippines. He was identified as the terror group’s chief recruiter and was responsible for training and sending militants to fight in Syria and Iraq.

Dr. Mahmud was among five Malaysians who fled the country. The others were Dr. Mahmud’s close aide Mohd Najib Husen (who has been killed in the Philippines), Selayang Municipal Council employee Muhammad Joraimee Awang Raimee and Darul Islam Sabah members Mohd Amin Baco and Jeknal Adil.

They have worked with other militant groups including Abu Sayyaf in various attacks and criminal activities in southern Philippines.

“However, we are still trying to gather enough intelligence to uncover Malaysian militants involved over there (Mindanao),” he said yesterday.

On the possibility that Dr. Mahmud might become the leader of the IS cell in southern Philippines, DCP Ayob said he suspected that was Dr. Mahmud’s ultimate goal.