Political analyst Robert Kelly on Friday said that while the diplomatic role of the Philippines in the North Korean crisis is small, it should still be concerned with the authoritarian nation’s missile tests.

“A small one,” Kelly told reporters when asked about the Philippines’ role in dealing with North Korea.

“The biggest concern…would be North Korean missile tests,” he said.

Kelly, who is currently in Manila to give a lecture on Korean politics, recalled that several years ago, a North Korean missile ended in the Philippine Sea.

Inquirer, back in December 2012, reported about the Philippine government’s condemnation of the event, which resulted in debris of a rocket launch falling 340 kilometers east of Luzon. 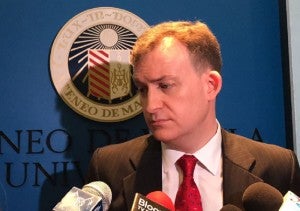 If the North Koreans are building an ICBM (intercontinental ballistic missile), they will have to test it,” Kelly said. He explained that firing it over Japan would “risk serious Japanese and US retaliation.”

“If they fire it south then it flies near you all (Philippines). That’s the thing I would be most concerned of,” he said.

“You are in the test flight path, which is disturbing.”

During his talk, which started with a five-minute disclaimer on the extremely viral video of his children disrupting his BBC interview, Kelly discussed the situation in North and South Korea.

North Korea, which has been pursuing a nuclear weapons program, is focused on creating its own ICBM, that will allow it to reach regions such as the United States.

Kelly said he believes such actions are most likely for “regime defense, regime security, not for offense.”

He said the North Koreans have been making tunnels for years because of fear of an American air strike, as was the case during the Korean War when the US employed a strategic bombing campaign against their nation.

Kelly said that once the US bombs them, North Koreans will simply go into the tunnels. The authoritarian state can also use human shields, he said, making sure the international community sees “graphic footage of dead kids.”

He also warned that South Korea, where he and his family lives, is “extremely vulnerable” because of its proximity and population density.

Instead of facing North Korea with force, he said one option is to cut off China’s support.

He described the North Korea-China border as porous. North Korea has kept it open to enable its citizens to get food. In turn, it has “helped regime stability.”

“If people are starving it threatens political stability,” Kelly said.

He said if China cuts off its support and resources stop flowing into North Korea, the country’s elites will be fighting with each other.

“This is the most promising thing that I think the Trump administration has said,” Kelly said, referring to the US appeal for China to pursue economic sanctions.