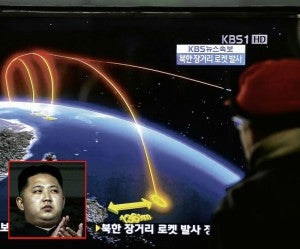 PYRRHIC VICTORY A man in Seoul, South Korea, watches a TV broadcast of North Korea’s successful rocket launch on Wednesday. The surprise launch was roundly condemned by most of the free world, including the Philippines. The suddenness of the launch ends all hope that the new North Korean leader Kim Jong-un might be a young progressive reformer. AFP/AP

The Philippines on Wednesday condemned North Korea’s rocket launch, debris from which reportedly fell into waters 340 kilometers east of Luzon.

The North American Aerospace Defense Command (Norad), said it had detected the launching and tracked the missile—a Galaxy-3 rocket, called the Unha-3 by North Korea—as its first stage appeared to fall into the Yellow Sea and the second stage into the Philippine Sea.

“Initial indications are that the missile deployed an object that appeared to achieve orbit,” Norad said. “At no time was the missile or the resultant debris a threat to North America.”

The rocket launch caught Philippine civil defense authorities by surprise, as North Korea had indicated technical problems with the rocket and recently extended its launch window to Dec. 29.

“We were really surprised. There should be a 24-hour notice for a rocket launch,” said Undersecretary Benito Ramos, administrator of the Office of the Civil Defense (OCD).

Because of the suddenness of the launch, Ramos said he had to use the radio stations that had called his office for confirmation to issue warnings to fishermen and airmen to avoid waters and airspace under the rocket’s trajectory, from Sta. Ana town on the northwest tip of Cagayan Valley to Polillo Island off Quezon province.

The Department of Foreign Affairs (DFA) said the Democratic People’s Republic of Korea (DPRK) violated United Nations Resolutions Nos. 1695 (2006), 1874 (2009) and 1718 (2006), which demanded that North Korea not use or conduct any launch using ballistic technology and the suspension of the North Korean ballistic missile program.

The DFA called on North Korea to “desist from acts of provocation and to end its use or testing of ballistic missile technology.”

“The Philippines joins other governments in urging the DPRK to undertake steps toward confidence-building and engagement with the international community in order to ensure peace and stability on the Korean Peninsula and the entire Asia-Pacific region,” the DFA said.

Defying international warnings, Pyongyang launched the rocket in the village of Tongchang-ri, about 56 km from the Chinese border of Dandong, across the Yalu River from North Korea, just before 10 a.m. (around 9 a.m. in Manila).

The spokesperson of South Korea’s defense ministry, Kim Min-seok, told a national televised news conference that a South Korean Aegis-equipped destroyer detected the launch at 9:51 a.m., local time, and the first stage fell into the Yellow Sea about a minute later.

The rocket then flew over a South Korean island near the border with North Korea a minute after that.

The rocket was seen flying west of Okinawa at 9:58 a.m., and then disappeared from South Korean radars.

No reports of injuries

The second stage was expected to have fallen into the Philippine Sea, but the Philippines does not have the technology to track the trajectory of the rocket, according to Ramos.

He said the Philippines had asked South Korea for guidance.

Ramos said debris from the rocket was expected to fall off Luzon 30 minutes after the launch.

But there were no reports of injuries or damage from debris, which CNN said fell into the Philippine Sea 340 km east of Luzon.

Ramos said he heard the CNN report, but there were no reports from local civil defense offices.

Philip Labuguen of the OCD in Cagayan Valley said the police and the military and local disaster councils in Cagayan and Isabela were contacting fishermen to gather reports of falling debris.

“Fortunately initial reports indicate that no part of the rocket fell within our area,” Labuguen said.

Rosalinda Bernardo, schools district supervisor in Palanan, Isabela province, said reports of the rocket launch did not frighten people in her town.

“We are ready for any eventuality, but we did not even know that [North Korea] already launched the rocket and debris reached Philippine waters,” Bernardo said.

“We are too far from North Korea. The possibility of [rocket] debris damaging our houses is very remote,” said Aladino Gonzales, principal of Maconacon Elementary School in Maconancon, Isabela.

The Philippine Coast Guard asked vessels in waters off Northern Luzon to report any sightings of debris from the rocket.

But Cmdr. Armand Balilo, Coast Guard spokesperson, said  there was a slim chance of debris being found.

“It fell into the deep sea,” Balilo said.

The Associated Press quoted a rocket expert as saying that North Korea’s rocket appeared to have improved on an April launch, which broke apart shortly after liftoff, but that it might be a day before US officials could determine whether a North Korean satellite was circling the Earth.

Success would be defined as “something that completes at least one orbit of the earth,” said rocket expert Jonathan McDowell of the Harvard-Smithsonian Center for Astrophysics.

But “clearly this is much more successful than their last attempt. It’s at least as good as they’ve ever done. They’ve proved the basic design of it,” he said.

The United Nations, Washington, Seoul and others saw the launch as a cover for a test of technology for missiles that could be used to strike the United States.

Tensions are high between the rival Koreas. The Korean Peninsula remains technically at war, as the 1950-53 conflict ended in a truce, and Washington stations nearly 30,000 troops in South Korea as a buttress against any North Korean aggression. Tens of thousands more are in nearby Japan.

The North has a long way to go before it can threaten neighboring countries, and perhaps one day the West Coast of the United States, with a nuclear-armed missile.

Pyongyang has yet to develop a nuclear warhead small enough to fit atop its missile, experts say, and it has not tested a reentry vehicle that can withstand the heat of the atmosphere.

Nor is it clear that the North knows how to aim a missile with much accuracy.

“What’s important here is the symbolism, especially if the test seems reasonably successful,” said Victor D. Cha, a scholar at the Center for Strategic and International Studies in Washington.

“It’s not as if the US can describe them anymore as a bunch of crazies who could never get anywhere with their technology. And it ends the argument that [North Korean leader] Kim Jong-un might be a young, progressive reformer who is determined to take the country in a new direction.” With reports from Christine O. Avendaño and Tina G. Santos in Manila; Melvin Gascon and Villamor Visaya Jr., Inquirer Northern Luzon; AP, AFP and New York Times News Service