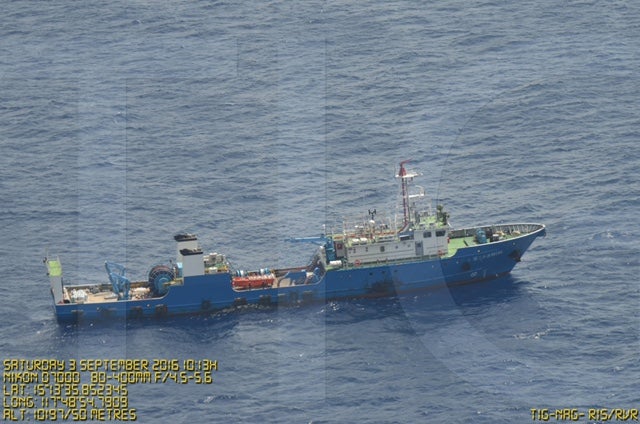 This Sept. 7, 2017 file photo released by the Philippine Department of National Defense (DND) shows one of the Chinese vessels in Scarborough Shoal, among the disputed areas of the South China Sea. (Photo from DND)

MANILA — Since none of the leaders of the Association of Southeast Asian Nations (Asean) raised the subject of China’s  reclamation activities and military build up in the disputed South China Sea in their meeting presided by Philippine President Duterte last Saturday, the Asean chairman’s statement kept silent about it.

This was disclosed by a diplomat on Sunday, in explaining why the chairman’s statement ditched reference to China’s “land reclamation and militarization” in the disputed waters that was earlier included in the draft statement of the Asean chairman.

“Not a single leader made reference to it. There was no discussion on reclamation and militarization (during the summit meetings). Almost everyone focused on the completion of the framework of the Code of Conduct (COC) (between Asean and China in the South China Sea,” the diplomat, who asked not to be named for not having been authorized to speak on the issue, told the Philippine Daily Inquirer.

The diplomat, who was privy to the Asean leaders’ meetings, said that “interestingly” not even Vietnam — which had publicly opposed the Chinese reclamation activities — and Malaysia which had raised concern about it privately — had not expressed concern over the matter during the meeting.

The Department of Foreign Affairs released belatedly on Sunday morning the 25-page Chairman’s Statement — which reflected the views of the 10 Asean leaders on several issues — to the just-concluded Asean summit. President Duterte had told media he would release the Chairman’s statement on Saturday night.  The diplomat who talked to the INQUIRER, however said it took time to finalize the agreement because some Asean members wanted to change some of the text there but added the changes had nothing to do with the South China Sea issue.

In the statement under the South China Sea — one of the subjects the leaders discussed involving “regional and international issues and developments,” the Chinese reclamation of reefs and marine areas into artificial islands and installing military facilities there were referred to as “recent developments in the area.”

“We took note of concerns expressed by some Leaders over recent developments in the area,” the ASEAN Chairman’s Statement said. “We reaffirmed the importance of the need to enhance mutual trust and confidence, exercising self-restraint in the conduct of activities, and avoiding actions that may further complicate the situation, and pursuing peaceful resolution of disputes, without resorting to the threat or use of force.”

“We reaffirmed the importance of maintaining peace, stability, security and freedom of navigation and overflight in and above the South China Sea. We welcomed the operationalization of the Guidelines for Hotline Communications among Senior Officials of the Ministries of Foreign Affairs of ASEAN Member States and China in response to Maritime Emergencies in the Implementation of the Declaration on the Conduct of Parties in the South China Sea and look forward to the early operationalization of the other early harvest measure which is in the Jount Statement on the Apolication of Code for Planned Encounters at Sea (CUES) in the South China,” the final statement said.

Also in the final statement, the Asean leaders “underscored the importance of the full and effective implementation” of the ASEAN-China DOC as it welcomed progress to complete the framework for a Code of Conduct in the South China by the middle of this year.

“We recognized the long term benefits that would be gained from having the South China Sea as a Sea of peace, stability and sustainable development,” the final statement said. 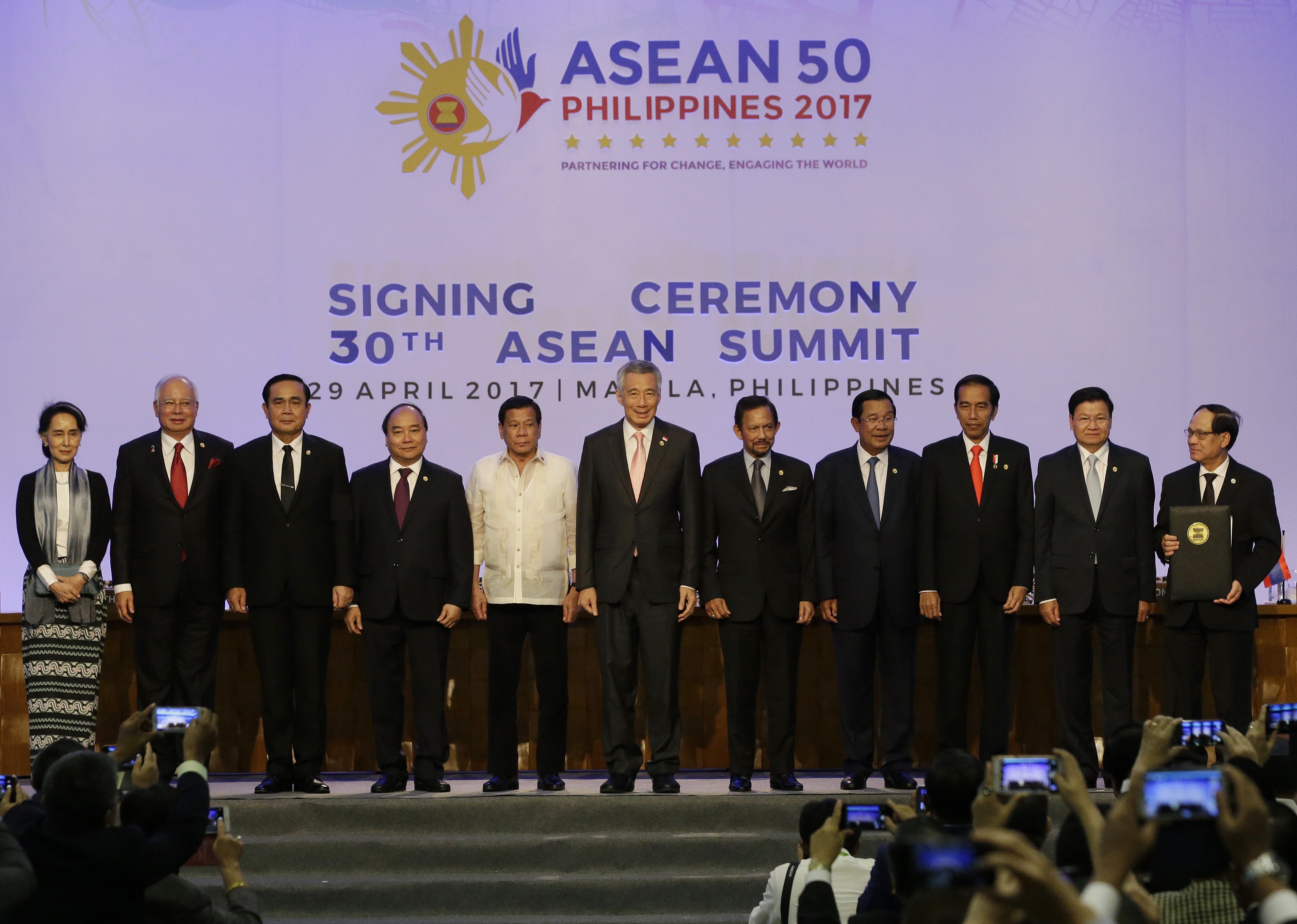 “We took note of the improving cooperation between ASEAN and China,” the statement also said.  The last draft took note of “improvement of bilateral relations between some ASEAN Member States and China.”

But the tamed language of the ASEAN Chairman’s Statement became a foregone conclusion on Saturday night after President Duterte told a news conference that he and ASEAN leaders did not talk about the issue of Chinese military build up in the South China Sea during their meeting.

“We never talked about anything (on) buildup or something. It would be useless. Actually it could be useless, except for fighting terrorism,” Mr. Duterte said when asked how ASEAN would deal with the Chinese militarization in the disputed South China Sea.

Prior to the meeting with ASEAN leaders which he presided, President Duterte also said it would be pointless to talk with Asean leaders about Manila’s victory over China in 2016 at the Permanent Court of Arbitration in The Hague, Netherlands.  The ruling by the United Nations-backed arbitral panel invalidated Beijing’s claims of almost the entire South China Sea and said China violated Manila’s sovereign right to fish and explore resources in the West Philippine Sea.

President Duterte chose not to raise the issue, saying this was not a matter for the Asean to tackle but something between Manila and Beijing to discuss.

Mr. Duterte had been seeking closer ties with China since he came into power 10 months ago.

The diplomat disagreed with views that the Chairman’s statement was too tame as he noted that the statement had actually managed to include reference to the arbitral ruling albeit, indirectly.

He said this could be seen under the matter of Asean Community Vision 2025 where Asean leaders “reaffirmed the shared commitment to maintaining and promoting peace, security and stability in the region, as well as to the peaceful resolution of disputes, including full respect for legal and diplomatic processes…”

The diplomat said that it was “next to impossible” to place in the text the arbitral ruling because “Asean works within a consensus. He cited the recent case where Malaysia wanted an Asean statement after some of its nationals were captured in North Korea but no statement was issued.

And he said this was a “simpler” case if compared to the South China Sea dispute that involved four claimant members — Philippines, Malaysia, Vietnam and Brunei.

In the end, through dialog with North Korea, Malaysia was able to secure the release of its nationals.

The diplomat said one of the Asean leaders during the meeting had noted the “improved” relations between China and Asean as he noted that the South China Sea dispute had been “sidelined” by the Korean Peninsula crisis which the regional bloc considers more of as an “immediate security threat.”  SFM