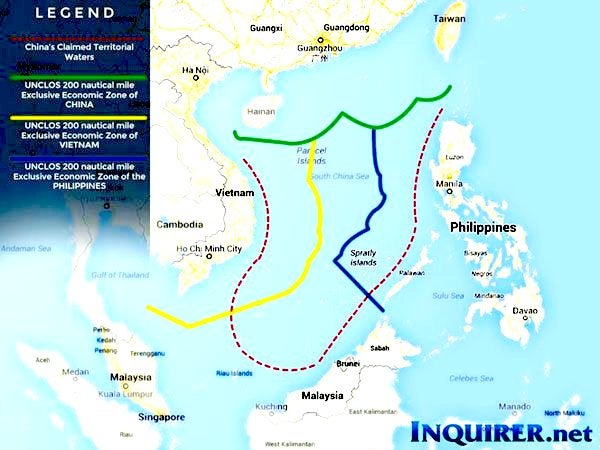 The final statement of the Association of Southeast Asian Nations (Asean) in its just concluded summit ditched reference to China’s land reclamation and militarization in the disputed South China Sea.

Instead, the Asean Chairman Statement issued by President Rodrigo Duterte being this year’s Asean chair and released on Sunday or a day after the summit ended, merely referred to the Chinese reclamation of reefs in the disputed waters into artificial islands and installing military facilities there, as “recent developments in the area.”

“We took note of concerns expressed by some Leaders over recent developments in the area,” the Asean Chairman Statement said. “We reaffirmed the importance of the need to enhance mutual trust and confidence, exercising self-restraint in the conduct of activities, and avoiding actions that may further complicate the situation, and pursuing peaceful resolution of disputes, without resorting to the threat or use of force.”

This was a big departure in the language used in the  earlier draft statement, reinforcing reports that China had lobbied for the Asean against mentioning its activities in the disputed waters out of its final statement.

But the tamed language of the Asean Chairman Statement was expected Saturday night after President Duterte told a news conference that he and Asean leaders did not talk about the issue of Chinese military build up in the South China Sea during their meeting.

“We never talked about anything (on) build up or something. It would be useless. Actually it could be useless, except for fighting terrorism,” Mr. Duterte said when asked how Asean would deal with the Chinese militarization in the disputed South China Sea.

Prior to the meeting with Asean leaders which he presided, President Duterte also said it would be pointless to talk with them about Manila’s victory over China last year before the United Nations arbitration tribunal which invalidated Beijing’s claims of almost the entire South China Sea and said China violated Manila’s sovereign right to fish and explore resources in the West Philippine Sea.

President Duterte’s reluctance to raise the issue was because he said this was not a matter for Asean to deal with it but something between Manila and Beijing.

“We reaffirmed the importance of maintaining peace, stability, security and freedom of navigation and overflight in and above the South China Seaz, we welcomed the operationalization of the Guidelines for Hotline Communications among Senior Officials of the Ministries of Foreign Affairs of Asean Member States and China in response to Maritime Emergencies in the Implementation of the Declaration on the Conduct of Parties in the South China Sea and look forward to the early operationalization of the other early harvest measure which is in the Jount Statement on the Apolication of Code for Planned Encounters at Sea (CUES) in the South China,” the final statement said.

Also in the statement, the Asean leaders “underscored the importance of the full and effective implementation” of the Asean-China DOC as it welcomed progress to complete the framework for a Code of Conduct in the South China by the middle of this year.

“We recognized the long term benefits that would be gained from having the South China Sea as a Sea of peace, stability and sustainable development,” the final statement said.

“We took note of the improving cooperation between Asean and China,” the statement also said which if compared to the last draft statement had read the leaders taking note of “improvement of bilateral relations between some Asean Member States and China.”

Indeed, in the last draft statement made at 1:30 pm of Friday, a copy of which was obtained by the Inquirer, it mentioned China’s land reclamation and militarization in the area and made reference to the 1982 United Nations Convention on the Law of the Sea (Unclos) which were taken out of the released Asean Chairman Statement.

Mr. Duterte has been seeking closer ties with China since he came into power 10 months ago. CBB/rga