Duterte: Asean leaders did not discuss sea dispute with China 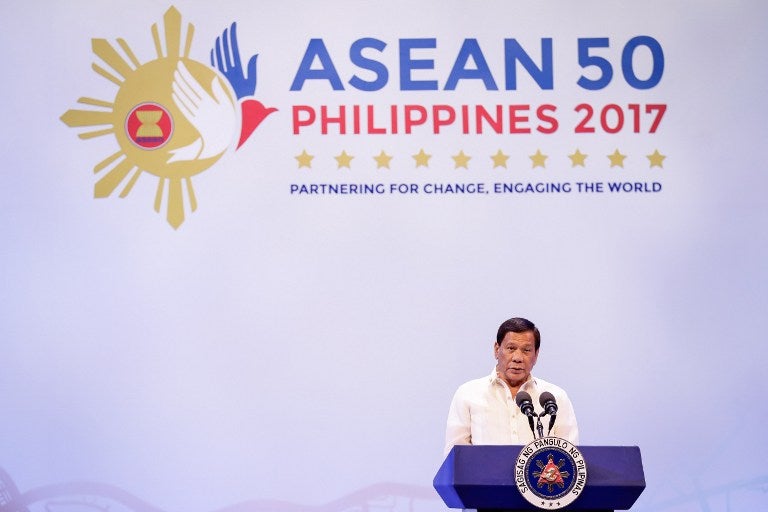 President Rodrigo Duterte said the heads of state of the Association of Southeast Asian Nations (Asean) did not discuss the maritime dispute in the South China Sea during their meeting on Saturday.

But Duterte said the possible enacment of a code of conduct in the South China Sea was high on the agenda.

“No terms of referrence but we want code of conduct enacted at the very least before end of this year so that everybody will feel comfortable sailing there because if not then it remains to be flashpoint,” Duterte told reporters in a press briefing at the Phiippine International Convention Center (PICC).

Asked about if the Asean leaders discussed how to address the aggressive reclamation of China in disputed seas, Duterte said the construction activities of China were not on their agenda.

“We never talked about the build-up or something,” he said. “Whenever we talk about a buildup it would be useless.”

He earlier emphasized the need for “the full and effective implementation of the declaration of conduct of parties in the South China Sea and expressed determination to complete the framework of the Code of Conduct in 2017.”

Duterte has repeatedly said he would not raise the the Permanent Court of Arbitration ruling favoring the Philippines’ maritime claims over the West Philippine Sea, saying he preferred to settle the matter with China in a diplomatic way.

“For those who are peace loving – just like me, I don’t want trouble – you have to be very careful,” he said in his press briefing.

In July 2015, the Philippines scored a victory in the Permanent Court of Arbitration when it invalidated Beijing’s claim to nearly the whole of the South China Sea.

But Duterte chose a “soft landing” instead of asserting the arbitration ruling. He embarked on a state visit in October 2016 and initiated bilateral talks with China. /atm