US State Department: No additional countries in Trump travel ban 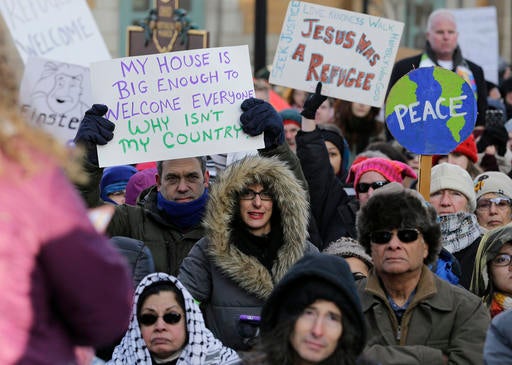 People protest at a demonstration in Market Square, Friday, Feb. 3, 2017, in Cleveland. The demonstration was organized in protest of President Donald Trump’s immigration order. AP Photo

LOS ANGELES—The US State Department on Friday morning (Friday night in Manila) belied rumors that there were other countries that would be included in President Donald Trump’s controversial travel ban.

In a statement, the Department of Homeland Security (DHS) said that only nationals from Iraq, Syria, Sudan, Iran, Somalia, Libya, and Yemen are covered by the Executive Order that imposes a 90-day pause on their entry to the United States.

“Importantly, these seven countries are the only countries to which the pause on entry applies. No other countries face such treatment. Nor have any other countries been identified as warranting future inclusion at this time, contrary to false reports,” the State Department said.

Rumors have circulated since Wednesday that nine other countries, including the “southern Philippines,” are included in another EO allegedly being drafted by the White House.

READ: State Department: Filipinos ‘welcome’ in US as PH not part of Trump travel ban

The State Department said that Trump’s EO signed a few days ago imposes a temporary “pause on travel” on nationals from the seven aforementioned countries “to ensure that the US government can conduct a thorough analysis of the national security risks faced by our immigration system.”

It said that the pause “does not apply to lawful permanent residents, dual citizens with passports from a country other than the seven listed, or those traveling on diplomatic, NATO or UN visas.”

“Special immigrant visa holders who are nationals of these seven countries may board US-bound planes, and apply for and receive a national interest exception to the pause upon arrival,” it added.