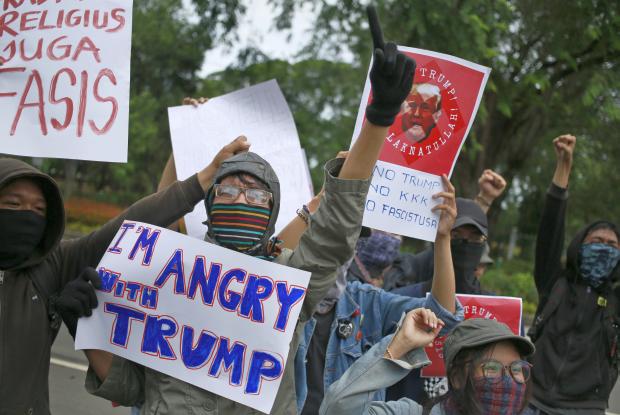 Activists shout slogans during a protest against US President Donald Trump outside the US Embassy in Jakarta, Indonesia, Saturday, Feb. 4, 2017. Dozens of students and activists from several rights groups staged the protest calling on the Indonesian government and the international community to help stop Trump’s order that temporarily banned travelers from seven predominantly Muslim countries. (Photo by DITA ALANGKARA/AP)

In Jakarta, dozens of students and activists from several rights groups called on the Indonesian government and the international community to help stop Trump’s order that temporarily banned travelers from seven predominantly Muslim countries. They do not include Indonesia, the world’s most populous Muslim nation, and the Philippines, a key US ally.

However, Indonesia is home to nearly 14,000 refugees seeking resettlement in third countries, and Trump’s ban will significantly impact their chances of going to the US, said rights activist Veronica Koman, who organized the protest.

A US judge on Friday imposed a nationwide hold on Trump’s ban on travelers and immigrants from Iran, Iraq, Syria, Sudan, Somalia, Libya and Yemen, siding with two states that had challenged the executive order that has launched legal battles across the country.

“We are here to protest Trump’s xenophobic and Islamophobia policies,” Koman said.

Protesters waved banners such as “I’m angry with Trump” and “No ban, no wall.”

“Actually this is not only for Muslims, but this is war against humanity because the immigrants or refugees around the world, not only from Muslim countries, don’t have to be treated like this,” said activist Filza Inanuma. “Everybody should have rights to go everywhere they want for their protection, for their life.”

A similar rally was held outside the seaside US Embassy in the Philippine capital, Manila, where protesters burned a portrait of Trump. No violence was reported. –Niniek Karmini