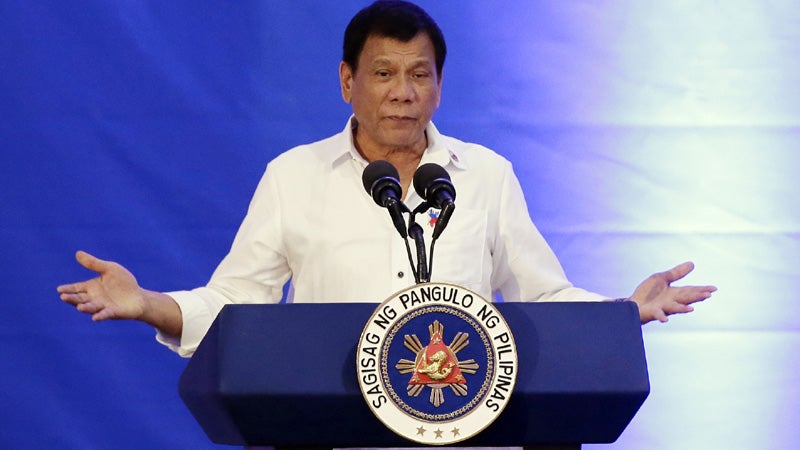 Undocumented Filipinos facing deportation from America due to US President Donald Trump’s crackdown on illegal immigrants and refugees cannot expect help from the Duterte administration.

President Duterte made this clear as he expressed support “out of respect” for Trump’s temporary freeze on the entry of refugees into the United States and his ban on travelers from seven Muslim-majority nations. Trump’s action drew widespread condemnation.

“To Filipinos there (in the United States), you better be on the right track. If you are not allowed to stay there where you are staying, get out because if you are caught and deported, I will not lift a finger. You know that it is a violation of the law,” the President said in a news briefing in Malacañang that lasted until the wee hours of Monday morning.

He said he would respect Trump’s executive action just as the new US leader had assured him that he, too, would respect the brutal war on drugs in the Philippines.

“If he has policies to protect his country, I will understand … So out of respect, I will not interfere,” Mr. Duterte said.

Outside the US Embassy in Manila, however, about 30 student activists on Monday afternoon staged a protest rally against Trump’s tough immigration order.

“We condemn the decision of President Trump to ban immigrants from Muslim countries. It’s clear that they can do the same to the Philippines. We have to remember, Trump once called the Philippines a terrorist nation,” said Mikhail Geriane, a member of the College Editors Guild of the Philippines.

The activists also criticized Mr. Duterte’s statement that he wouldn’t lift a finger to help undocumented Filipinos in the United States.

“We encourage him to stand up for the Filipinos and for all the people oppressed by US policy because one way or another it will affect us,” Geriane said.

Unlike Trump, however, Mr. Duterte said he was open to offering sanctuary to asylum seekers who were running away from religious and political persecution.

But such an arrangement should be first approved by Congress, he added.

“In the name of humanity and God, we’ll have to make some adjustments,” the President said. “If there is a compelling reason for us to offer sanctuary, I’m one of those who will say OK to those who have nowhere to go.” —WITH A REPORT FROM AIE BALAGTAS SEE