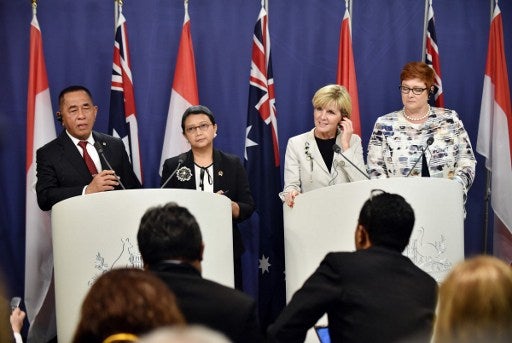 “We have agreed to explore options to increase maritime cooperation and of course that would include coordinated activities in the South China Sea and the Sulu Sea,” Bishop told the Australian Broadcasting Corporation.

“This is all consistent with our policy of exercising our right of freedom of navigation and that’s in accordance with international law.”

READ: Indonesia vows to defend ‘every inch’ of territory

Ryacudu was cited by the Sydney Morning Herald as saying he had proposed a “peace patrol” with Australia.

“There are no intentions to disrupt the relationship (with China). It is called a peace patrol, it brings peace. It is about protecting fish in each other’s areas,” he said.

Beijing asserts sovereignty over almost all of the resource-rich South China Sea, despite rival claims from its Southeast Asian neighbors — most notably the Philippines, which took the case to the Hague-based Permanent Court of Arbitration.

The court ruled in July that there was no legal basis to China’s claims — a verdict Beijing dismissed vehemently.

Australia, like staunch ally the United States, has no claims of its own in the area, but insists that all shipping has a right to pass through seas it regards as international waters.

Last month the US sailed a warship near disputed territory in the South China Sea, with Beijing slamming the move as a “serious illegal act” and “deliberately provocative”.

Discussion on potential joint patrols comes amid uncertainty in the region with Philippine President Rodrigo Duterte unsettling Manila’s traditional allies by signaling a shift away from Washington towards Beijing.

Unlike some Southeast Asian neighbors, Jakarta has long maintained it has no maritime disputes with China in the South China Sea and does not contest ownership of reefs or islets there.

But Beijing’s expansive claims overlap Indonesia’s exclusive economic zone — waters where a state has the right to exploit resources — around the Natunas, a remote scattering of islands that are rich fishing grounds.

In June, Indonesian President Joko Widodo toured the islands on a warship, in a move seen as sending a strong message to China to respect Indonesian sovereignty.

Bishop said the Australian navy had already conducted joint exercises in the South China Sea with India and the US as “a regular part of what our navy does and it’s also part of our engagement in the region”.