Indonesia vows to defend ‘every inch’ of territory 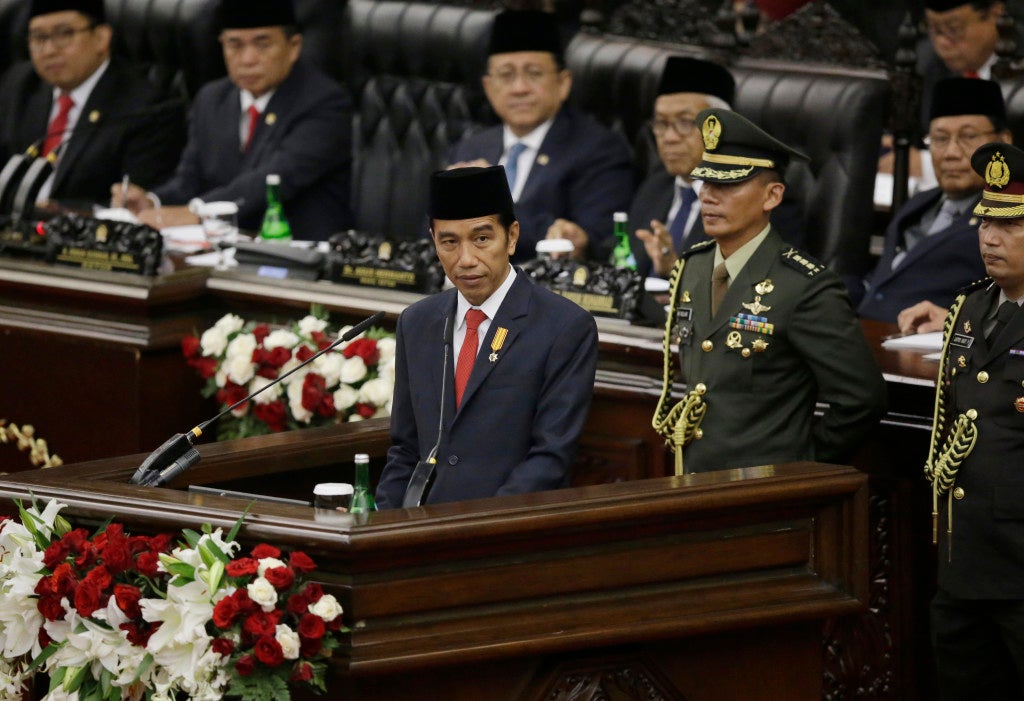 Indonesia’s President Joko Widodo, center, delivers his State of The Nation address ahead of the country’s Independence Day at the parliament building in Jakarta, Indonesia, Tuesday, Aug. 16, 2016. AP

In a state of the nation address he also said Indonesia was “actively involved” in seeking a peaceful solution to the broader regional dispute about ownership of islands in the Sea.

Widodo’s underscoring of Indonesia’s sovereignty over the Natunas islands — and the resource-rich waters surrounding them — comes at a time of high maritime tensions between Beijing and Jakarta after repeated clashes there.

“We are developing regions like Entikong, Natuna, and Atambua so the world can see that Indonesia is a big country, and every inch of its land and water is truly taken care of,” he said in a televised address which did not refer directly to China.

The government has previously said that Chinese ships would be among those scuttled. The sinking in May of a large Chinese vessel ship caught fishing illegally around the Natunas drew a sharp rebuke from Beijing.

Unlike several of its Southeast Asian neighbors, Indonesia has long maintained it has no maritime disputes with China in the South China Sea and does not contest ownership of any territory there.

But Beijing’s claims overlap Indonesia’s exclusive economic zone — waters where a state has the right to exploit resources — around the Natunas. There has been a rise in clashes there between Indonesian patrol and navy boats and Chinese fishing vessels and coastguards.

After one such encounter in June, Widodo visited the Natunas on a warship. His defense minister has since outlined plans to improve an airstrip and deploy surface-to-air missiles, drones and other military hardware to the remote islands.

In his wide-ranging address Widodo also warned that Indonesia must respect human rights or risk failing to become a “productive, developed, or winning” country.

The former furniture salesman promised upon election in late 2014 to address historic rights abuses. But he has since been criticised for authorizing the execution of drug traffickers, remaining silent during an anti-gay backlash and appointing an alleged war criminal as his security minister./rga