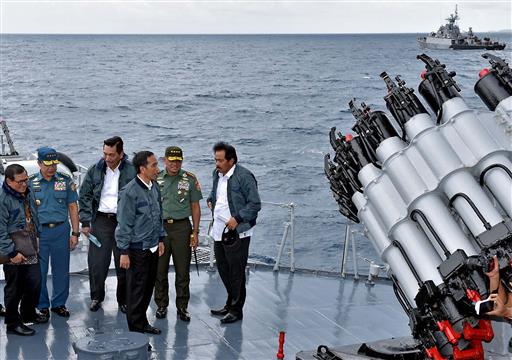 JAKARTA, Indonesia  — Indonesian President Joko “Jokowi” Widodo visited the Natuna islands Thursday in a move designed to send a message about the country’s commitment to protecting its sovereignty in the area at the edge of the South China Sea.

Jokowi, accompanied by top security officials, toured the area on the same naval ship that fired warning shots last week at Chinese fishing boats and detained one of the vessels and its seven crew members.

He then presided over a meeting on board the ship, discussing issues including development of the remote islands, about 1,100 kilometers (680 miles) north of Jakarta, the capital.

Senior political and security minister Luhut Binsar Pandjaitan said the visit would “send a clear message” that Indonesia is very serious about protecting its sovereignty.

“In the course of our history, we’ve never been this stern (with China),” the Jakarta Post newspaper quoted Pandjaitan as saying. “This is also to demonstrate that the president is not taking the issue lightly.”

On Sunday, China’s Foreign Ministry released a statement of protest over last Friday’s shooting incident, saying the Indonesian navy had “abused its military force.” It described the waters as China’s traditional fishing ground.

China’s expansive claims to the South China Sea do not include the Natuna islands, which are nearly 2,000 kilometers (1,250 miles) from the Chinese mainland.

But China’s “nine dash line,” which it uses to roughly demarcate its ambitions for its maritime boundaries, overlaps with a section of Indonesia’s internationally recognized exclusive economic zone extending from the Natuna islands.

The incident Friday was the third involving Chinese fishing boats in recent months. In March, Indonesia intercepted a Chinese fishing vessel off the Natuna islands. In May, an Indonesian frigate fired shots at a Chinese trawler when it refused to stop fishing, and then seized the vessel and its eight crew members.

Indonesia, the world’s largest archipelago nation, has taken a tough stance against illegal fishing since Jokowi took office in October 2014. It has blown up 176 foreign fishing boats caught fishing illegally in Indonesian waters since then.

“I think it is a disturbing trend to see Chinese fishing vessels accompanied by coast guard vessels used in a way that appears to be an attempt to exert a claim that may not be legitimate,” the U.S. official told Asian reporters in a teleconference. The official spoke on condition of anonymity.

She said it pointed to an expanding use of Chinese military and paramilitary forces “that is provocative and potentially destabilizing.”