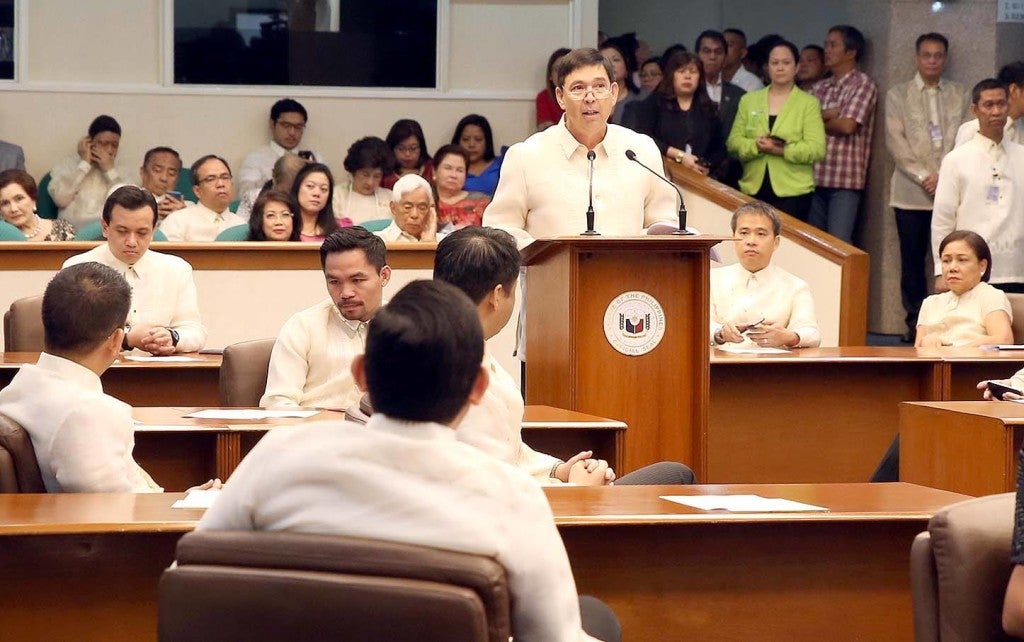 The Philippines should be ready to “finance and fill” whatever “logistical void” would be left by Americans if the Enhanced Defense Cooperation Agreement (Edca) between the country and the United States would be scrapped, Senate Minority Leader Ralph Recto said on Wednesday.

“The vacuum will be felt more in disaster relief operations because in many typhoons in the past, Americans have been the first responders, even sending entire carrier battle groups to help in rescue and reconstruction,” Recto said in a statement.

“And in this era of climate change, with its powerful typhoons, we need all the help we can get due to our lack of resources to airlift aid to damaged places,” he said.

Recto said President Rodrigo Duterte should clarify his statement that he would “not want to see any military man of any other nation except for the Philippine soldier” in the country as some nations may interpret it that their troops, even in mercy missions, would no longer be allowed to set foot in the Philippines.

“If Duterte’s latest announcement morphs into policy, the government should be able to make the distinction, that while it no longer welcomes foreign boots on the ground to fight our wars, it would welcome them still if they’re from workmen doing non-security chores,” he said.

“There’s an element of internationalism in doing calamity relief so it is hoped that Duterte’s self-reliant defense posture should not dampen the desire of other countries to send their troops to help us in our time of need,” the senator said.

Recto though expressed belief that Edca’s “sidelining” would not radically alter the US-Philippine relations.

“Edca sprang from the US-PH Mutual Defense Treaty (MDT) of 1951 and the Visiting Forces Agreement. It is the offspring of these two pacts. And we’re not abrogating them,” he said, adding that many still believed that the objective of the MDT could still be advanced sans Edca.

But in the event that the agreement would be downgraded, Recto said, it would be up to the diplomatic skills of Duterte officials to negotiate the retention of Edca’s “humanitarian assistance and disaster response (HADR)” component.

“Edca allows the ‘storage and prepositioning of HADR equipment, supplies and material.’ It is to our country’s benefit that such an arrangement will continue to be in force,” he said.

The senator also believes that one of the reasons for Edca’s “vulnerability” was because it did not get the “seal of approval of an institution that was supposed to ratify it.”

Recto insisted his position that Edca is a treaty that should have been ratified by the Senate.

But in July this year, the Supreme Court ruled with finality on the constitutionality of Edca as an executive agreement that did not need the Senate concurrence. IDL