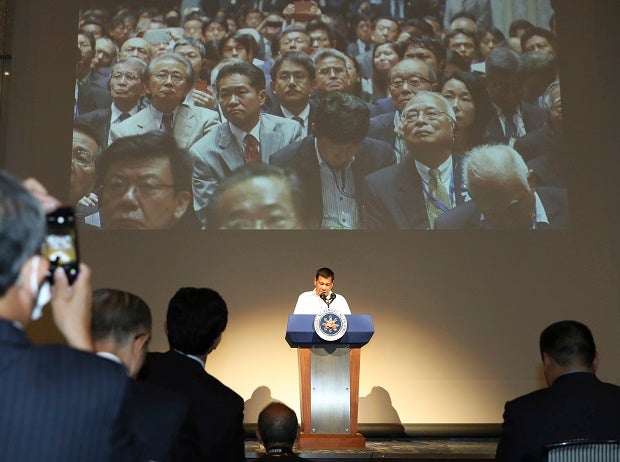 Philippine President Rodrigo Duterte addresses a speech at the Philippine Economic Forum in Tokyo, Wednesday, Oct. 26, 2016. President Duterte is on a three-day official visit to Japan, his first as Philippine leader. AP

TOKYO— As he seeks to redefine the country’s foreign policy, President Rodrigo Duterte assured Japan that he would not abandon the country’s security partnership with it and would remain a partner in maritime safety.

Duterte made the declaration in a luncheon in Tokyo hosted by Japanese business organizations.

Japan is a close ally of the US, and Duterte’s announcement of a “separation” from the US and a move to curry favor with China has caused some confusion.

Duterte told Japanese businessmen that he seeks only peace and friendship, and the Philippines’ ties with Japan would remain intact.

“I give you my word today that we will not abandon Japan in our partnership and security matters, given the common belief that our conflicts and problems with other nations must be resolved peacefully, in accordance with international law,” he said.

The Philippines would be a player in maritime safety and would avoid violence, he added. CDG