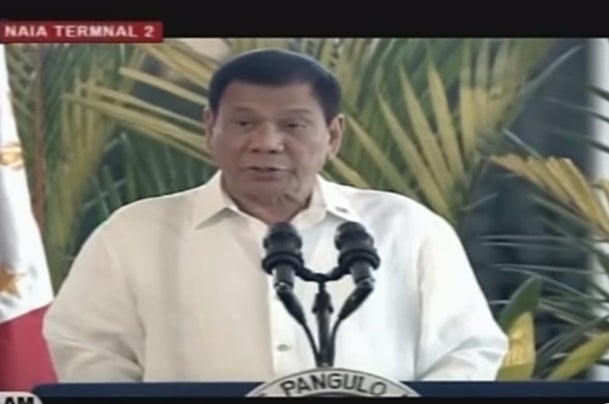 President Rodrigo Duterte at the Naia Terminal 2 before his flight to Japan for his official visit. SCREENGRAB FROM RTVM

President Rodrigo Duterte on Tuesday said he wanted to scrap the Edca, a military agreement signed between the Philippines and the United States in 2014.

“We have the Edca. Well, forget it. If I stay here long enough, one day that Edca will, if it’s an executive agreement then I will just…” Duterte said while making a sweeping gesture during a press conference at the Ninoy Aquino International Airport (Naia) Terminal 2 before he embarked on an official visit to Japan.

The President said he no longer wanted to see foreign soldiers in the Philippines.

“I look forward to the time when I no longer see any military groups or soldier in my country, except the Filipino soldier,” he said.

“I really hate it. I don’t want it. We don’t need it. There’s not going to be any war in the future,” he added.

Duterte earlier announced his administration was reviewing the Edca and threatened to stop its implementation. JE/rga