China under no illusion PH will pivot away from US 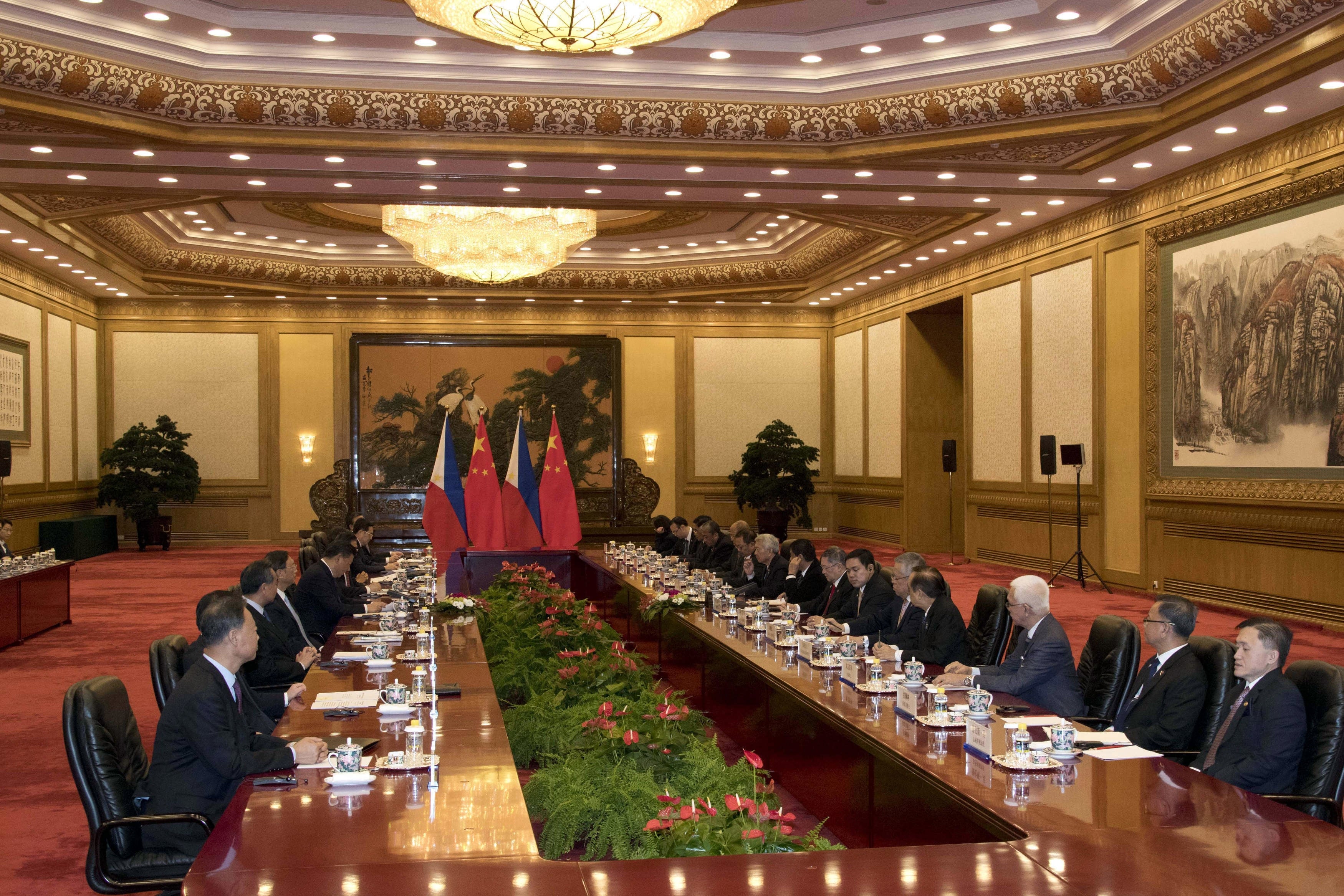 Philippines and Chinese officials led by their respective president hold talks during a bilateral meeting in the Great Hall of the People in Beijing, China, Thursday, Oct. 20, 2016. Philippine President Rodrigo Duterte was meeting Thursday with his Chinese counterpart Xi Jinping in Beijing as part of a charm offensive aimed at seeking trade and support from the Asian giant by setting aside a thorny territorial dispute. AP

BEIJING (The Straits Times/ ANN)—Chinese media and officials are silent on Philippine President Duterte’s effusive praise of China and his remarks on “separation from the United States.”

While Beijing has laid out the red carpet for Mr. Duterte this week and returned the embrace of the Philippine President, it is under no illusion that Manila will pivot away from Washington.

China may stand to gain if Mr. Duterte breaks away from the United States in geopolitical terms, as he said he would on Thursday. But it is fully aware that he does not decide on the Philippines’ foreign policy on his own and will have to go through the political processes domestically, Chinese analysts said.

During his four-day stay in Beijing, Mr. Duterte took every opportunity to assert his anti-West stance, especially towards the United States.

The 71-year-old leader went as far as to proclaim his “separation from the United States” in both military and economic terms at a business forum in Beijing on Thursday. He showered praise on the country and its people, and announced that “Duterte of the Philippines is veering towards China because China has the character of an Oriental. It does not go around insulting people.”

While Beijing laid out full honors for Mr. Duterte in a reception seldom accorded to regional leaders, Chinese media and officials have been silent on his effusive praise of the Chinese and his declaration of separation from the United States.

Chinese netizens, displaying skepticism, said he was making these remarks to extract benefits from China, such as soft loans.

Some likened his “separation” from the United States to a new social phenomenon in China in which people make use of fake divorces to get around restrictive regulations in order to obtain a second housing loan.

Professor Li Kaisheng from the Shanghai Academy of Social Sciences noted that while Mr. Duterte wishes to separate from the United States, what it really means is unclear. “This is not the first time Mr. Duterte has said this, and it merely represents what he really feels.”

But it is hard to say if this will be translated into actual policies, he said.

“On the one hand, it may be good for Beijing given that the United States has been using the Philippines to contain China in the region,” Li said.

On the flip side, if Mr. Duterte gets toppled as a result of soured US-Philippine ties, Beijing may stand to lose even more given that Sino-Philippine relations are only starting to improve, he added.

Noting that there had been no reaction from Chinese officials so far to Mr. Duterte’s remarks, he said he did not expect them to respond.

Beijing-based analyst Zha Wen said China does not expect Manila to break its longtime alliance with Washington. “We should not take a zero-sum view on these relationships,” Zha said.

What Beijing wants is for bilateral relations to improve and for Manila to conduct a more balanced foreign policy, she added.

Concurring with Zha, Li said the agreements and loans signed should not be viewed as carrots to support Manila’s break from Washington.

Beijing has responded to Mr. Duterte’s friendly overtures with a lavish welcome that showed a high level of goodwill and respect.

In return, Beijing has achieved its goal of diffusing tensions in the South China Sea by reaching an agreement with Manila to resume bilateral talks on their territorial disputes.

This could signal to other countries that in handling conflicts with China, it is best to put aside disputes and focus on cooperation, said Xu Liping, an Asean researcher with the Chinese Academy of Social Sciences.

“It is unrealistic to expect China to compromise. As a big country, it has the ability to give you a lot of benefits,” he added. TVJ

His usual hype or (shudder) not?