Duterte sneaks out of hotel to grab a bite 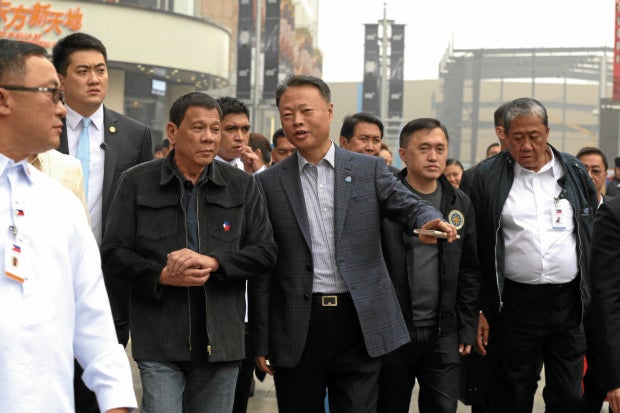 BEIJING—One hazy afternoon during his state visit, unorthodox President Rodrigo Duterte sneaked out of his official suite at the Grand Hyatt Hotel and walked along the busy Wangfujing snack street to have his fill of fine local cuisine.

Surrounded by some 50 closed-in aides and friends, Duterte headed on Wednesday to the five-star Da Dong Beijing Roast Duck Restaurant, which has attracted a number of celebrities and VIPs.

Clad in a dark green jacket with a Philippine flag emblem worn over a dark blue collared shirt, the President slipped into the restaurant located some 200 hundred meters from the hotel’s backdoor and caused a media frenzy. But he was running late for his culinary agenda and declined to be interviewed.

Based on an official Palace announcement, he joined the Friends of the Philippines Foundation at that late luncheon, during which the foundation presented to the president a plan for drug rehabilitation treatment center in the Philippines.

Named after the celebrity Chinese chef who owns it, Dadong was described by a local as a “five-star” restaurant where meals could easily cost around 1,000 renminbi (P7,150) per head. It offers fusion Chinese cuisine and has sleek interiors and a few function rooms for small groups.

Yan Lin, reception director at Dadong, said it must have been a last-minute decision by the presidential party to dine at the restaurant because the lunch reservation was made at 1 a.m. of the same day. The restaurant staff had to come in early morning to prepare for the arrival of the Philippine President and his party, he added.

“He ate some fish but not crabs or other seafood. Also the sea cucumber, also the beef,” Yan said, referring to the spicy beef dish that has grilled beef cubes enhanced with herbs and spices.

Yan said the party must have liked the beef so much because the group later ordered the same spicy beef dish for delivery at the hotel, which was bustling with activity during the entire four-day visit that saw the Philippine leader rekindle bilateral ties with China.

Mr. Duterte drank some red wine with the entourage during this late luncheon, said one waitress who served the party.  A section of the main dining area was closed to accommodate the group, while a big round table was brought in from another function room to serve as presidential table.

When the Inquirer went to eat lunch at the same restaurant two days after President Duterte’s visit, there was still palpable excitement among the restaurant staff.  Yan agreed to share some of the pictures he had taken using his mobile phone and volunteered to send other pictures taken by the staff.

Asked if other heads of state had dined there, Yan said a prime minister of Israel did. “There were national leaders (who had been there before) but not in such a big event, usually low-profile,” he added, pointing to a wall that had pictures of some of the famous personalities who had dined at the restaurant. They included Prince Albert of Monaco and Spain’s Prime Minister Mariano Rajoy during his 2014 state visit.

Mr. Duterte, who will soon be included in the celebrity gallery, wrote on the red piece of paper given him: “Best Wishes!! RDuterte Pres. Philippines.”

That Wednesday was the most relaxed of the four days of the President’s state visit. He arrived Tuesday night straight from his Brunei visit and had the whole Wednesday to himself before his address to the Filipino community in China in the evening.

Instead of visiting some heritage sites like the Great Wall of China or the Forbidden City, Mr. Duterte opted to have a gastronomic experience a day before his meeting with Chinese President Xi Jinping and Chinese Premier Li Keqiang at the Great Hall of the People.

On Thursday, China rolled out the red carpet for Mr. Duterte with a pompous welcome ceremony ahead of a series of bilateral meetings and other official engagements. The President’s team brought home $24 billion in investments and financing commitments from China, including private sector-initiated deals.

Duterte on China visit: ‘Turning point in our shared history’

Duterte’s deference delights China but is questioned at home