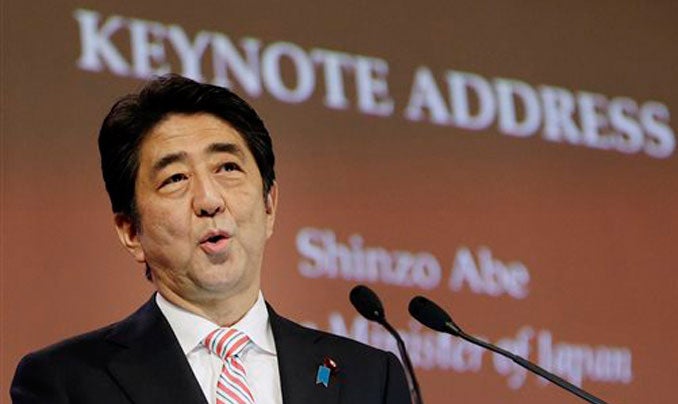 Japanese Prime Minister Shinzo Abe would like to listen to President Rodrigo Duterte’s explanation of the Philippines’ new foreign policy direction amid confusion over his surprise announcement of a split from the United States to pursue closer ties with China.

Shortly after returning home from a state visit to China, Mr. Duterte sought to clarify his statement that he was seeking a “separation” from the US, its long-standing ally and staunchest military backer.

He said that it did not mean he was preparing to cut diplomatic relations with Washington, even as he had repeatedly cursed US President Barack Obama for atrocities committed by invading American forces more than a century ago.

The President explained that what he meant “was a separation of a foreign policy.” He has earlier vowed to end military cooperation with the US, which some analysts said was a mistake in the face of China’s continued territorial challenge in the South China Sea.

Still, Abe would like to listen to Mr. Duterte’s explanation of his new policy, according to Atsushi Ueno, Deputy Chief of Mission of the Japanese Embassy.

Mr. Duterte is scheduled to fly to Japan on Tuesday  for a three-day visit, where he is expected to meet with Abe and Japan’s top business leaders. He would also call to Emperor Akihito, as the two countries seek to boost their 60-year-old ties.

Ueno declined to comment on the Philippines’ new foreign policy or its relationship with other countries, but said Japan would listen to Mr. Duterte’s explanation.

“And if, you know, President Duterte has a new idea or a new policy in the foreign policy, I think Prime Minister Abe would like to listen to President Duterte’s explanation in the discussion with him,” Ueno told reporters.

He said the two leaders may discuss the Philippines’ move to distance itself from Washington and move closer to China, the biggest regional power seeking to rival US dominance.

“If it is actually happening, that may be what the two leaders will discuss and we would like to listen to what President Duterte explains to our leaders about the foreign policy of his administration,” Ueno said.

He said he was optimistic that good bilateral relations would continue under a Duterte presidency.

The Yomiuri Shimbun, Japan’s leading paper, said Tokyo has been been left confused by President Duterte’s announcement and also “by the actual steps taken to strengthen relations with China through his latest talks with Chinese counterpart Xi

“Japan’s confusion is fueled by concerns it may have to review its joint strategy with the United States of backing the Philippines in a South China Sea territorial dispute,” the newspaper said.

“Duterte’s comments have been met with various reactions. It’s important to directly hear from him to facilitate better communication on the issue,” Foreign Minister Fumio Kishida was quoted by the paper as saying.

While in Tokyo, Mr. Duterte is expected to hold talks on matters of security, economic and defense cooperation, infrastructure development and development projects in Mindanao, among

Japan has been the Philippines’ top trading and official development assistance partner in 2015 and in years prior.

Ueno said Japan would like to strengthen bilateral cooperation with the Philippines as well as their strategic partnership. They are also expected to reaffirm their cooperation on regional and international issues. TVJ

Japan in quandary over Duterte’s remarks