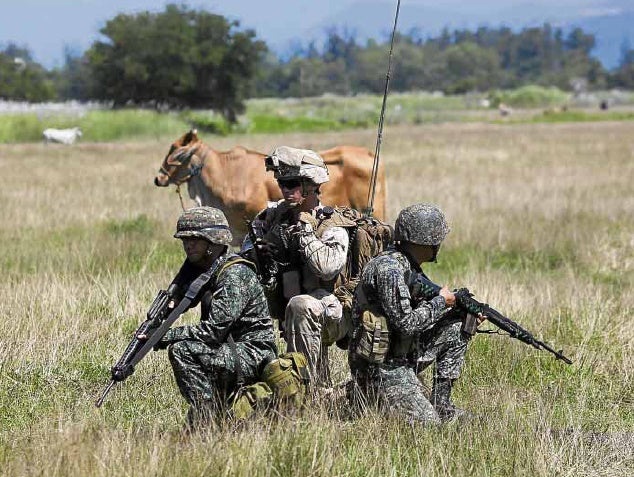 LAST WAR GAMES Filipino and US soldiers take part in jointmaneuvers in April. President Duterte says US-Philippine marine landing drills in October will be the last during his term. MARIANNE BERMUDEZ

The Pentagon chief’s remarks came as he headed for a security summit in Hawaii, where concerns about President Duterte, China’s continued military expansion in the South China Sea, and the return of Islamic State (IS) group jihadists to the region were high on the agenda.

“As it has been for decades, our alliance with the Philippines is ironclad,” Carter said, addressing troops aboard the USS Carl Vinson aircraft carrier, docked in San Diego, California.

Mr. Duterte on Wednesday said he would soon end joint military exercises with the United States, a symbolic blow to a military alliance dating back more than 60 years.

“I will serve notice to you now, that this will be the last military exercise, jointly Philippines-US, the last one,” Duterte told several hundred Vietnam-based Filipinos during a rambling address in Hanoi as he started a trip to Vietnam.

On Thursday, Cabinet officials scrambled to explain Mr. Duterte’s shock remarks, with Foreign Secretary Perfecto Yasay and National Security Adviser Hermogenes Esperon both saying the President was referring to next month’s marine landing drills between US and Philippine forces.

But Mr. Duterte, upon arrival in his hometown Davao City from Hanoi early on Friday, told reporters that the Philippine-US Amphibious Landing Exercises (Phiblex), scheduled for Oct. 4 to 12 in the Philippines, would definitely be the last war games  with the United States during his six-year term.

Mr. Duterte said that while asking for joint maneuvers with Philippine forces, the United States was never keen on improving the capability of Filipino soldiers to respond to threats.

He said he was aware that the jet fighters the Philippines had recently bought were made in South Korea, but he claimed these were built using US technology and could not have been sold to the Philippines without blessing from the United States.

“We have planes, but they won’t sell (missiles) to us. What’s the use? So I said two or three is enough … just for ceremonial (purposes),” he said.

“It’s all soiled clothing,” he added, describing the things the Philippines gets from security cooperation with the United States.

Mr. Duterte also lashed out at two US senators—Benjamin Cardin of Maryland and Patrick Leahy of Vermont—for criticizing his brutal approach to solving the Philippines’ drug problem.

“Stop being hypocrites. Do not pretend to be the moral conscience of the world. Do not be the policemen because you do not have the eligibility to do that in my country,” he said.

He said the United States and its allies, including Britain, also violated human rights in other countries, such as Iraq, which they invaded “on the flimsy excuse that there was a weapon of mass destruction there.”

As for the European Union, Mr. Duterte said it allowed migrants fleeing the Middle East to rot at sea in the middle of winter.

“They’re only good at criticizing,” he said, adding that his critics were “pea-brained.”

Mr. Duterte’s ending war games with the United States could further dampen relations with Manila’s longtime ally after the firebrand leader, who has also called for US special operations forces in the country’s south to leave, branded US President Barack Obama a “son of a bitch” and extended overtures to China and Russia.

The US-Philippine alliance has “had its ups and downs and survived,” one official said, speaking on condition of anonymity to discuss the matter. “It’s going to continue to survive based on what we think are strong US-Philippine common security interests.”

As for the military exercises, “we can be flexible about when and if they happen again,” the official added.

Carter is set to meet his Philippine counterpart, Delfin Lorenzana, in Hawaii on Friday, where the Pentagon chief is hosting an “informal” meeting for defense ministers of the Association of Southeast Asian Nations (Asean).

Previous summits have tended to focus on China and its growing reach across the South China Sea.

Carter stressed, as he has repeatedly, that the US military will ignore Beijing’s contentious South China Sea claims, and keep operating in waters and airspace surrounding the artificial islands.

“We hope that China chooses to join the rest of the region in strengthening and upholding the shared principles that have helped so many nations around the region, including China, to rise and prosper,” he said.