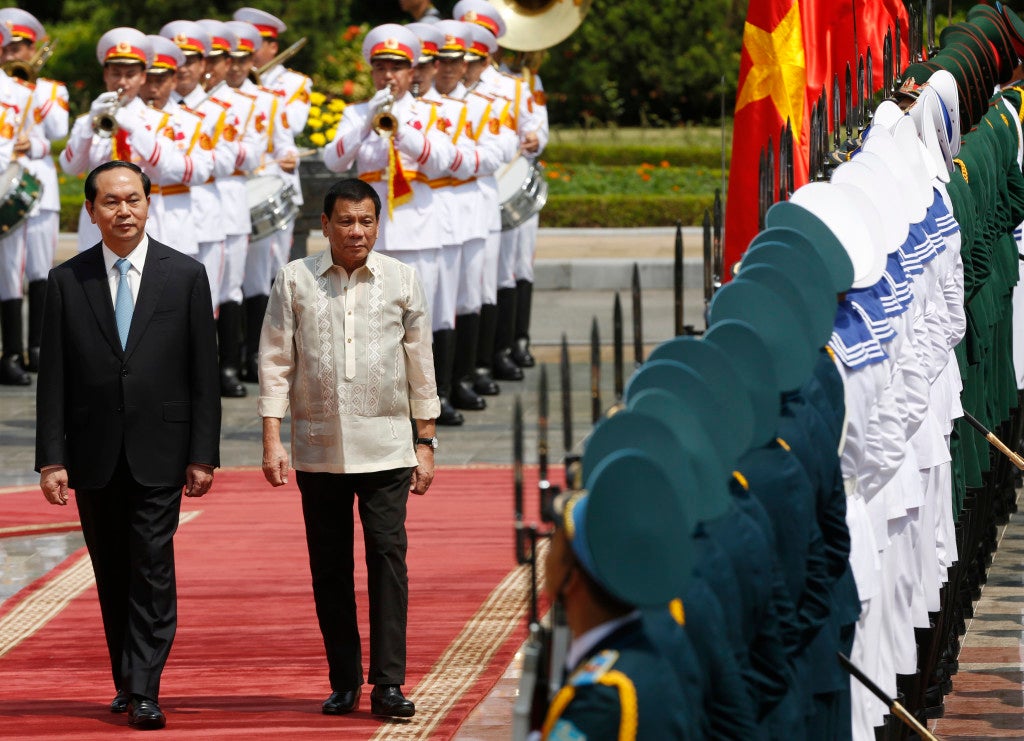 DIGONG IN HANOI President Duterte and Vietnamese President Tran DaiQuang review the honor guard during the Philippine leader’s arrival in Hanoi onWednesday for a two-day visit to Vietnam. AP

HANOI—The Philippines and Vietnam have agreed to establish a six-year action plan to boost their relations, including fighting transnational crime and trade on illegal drugs.

In a joint statement issued at the end of President Rodrigo Duterte’s visit to Vietnam on Thursday, the two countries said they would step up people-to-people exchanges, high-level and other visits, uphold bilateral cooperation mechanisms, and implement agreements they have signed.

Mr. Duterte arrived home early on Friday and told reporters that he and Vietnamese President Tran Dai Quang had agreed to ensure security in the hotly disputed South China Sea.

“We reaffirm[ed] commitment to maintaining and promoting peace, security, stability, safety and freedom of navigation and overflight, as well as unimpeded commerce in the region, particularly in the South China Sea,” Mr. Duterte said.

The President said he and Tran had also agreed to “strengthen existing maritime cooperation mechanisms” and “adopt measures to ensure the safety and security of fishermen from both countries.”

Mr. Duterte visited Vietnam on Wednesday and Thursday at the invitation of Tran.

In their joint statement, the two leaders recalled the strategic partnership signed in November 2015 on the sidelines of the Asia-Pacific Economic Cooperation (Apec) summit in Manila.

The partnership was aimed at “elevating the level and intensity of bilateral exchanges” and to “harness advantages for common development and in pursuit of shared strategic interests.”

Both countries are members of the Association of the Southeast Asian Nations (Asean). Both are claimants to disputed territories in the South China Sea, much of which is claimed by China.

Vietnam will play host to the next Apec meet, while the Philippines is the chair of Asean for 2017.

Mr. Duterte and Tran urged peaceful resolution of disputes, including respect for legal and diplomatic processes, self-restraint in the conduct of activities, without resorting to the threat or use of force, in accordance with the universally recognized principles of international law, said the joint statement.

“Both leaders reaffirmed their commitment to upholding peace, stability and prosperity in the region, including advancing Asean community building efforts through the full and effective implementation of the Asean Community Vision 2025,” the statement said.

They agreed to intensify defense and law enforcement cooperation against transnational crime and the trade and trafficking of drugs in Southeast Asia, it said.

It said the two countries would be sharing expertise, experience and intelligence information in boosting law enforcement cooperation.

“On the various aspects of bilateral exchanges, the two presidents agreed to establish a six-year action plan (2017-2022) to guide the implementation of activities in the areas of common interest under this new level of relations,” the statement said.

Mr. Duterte and Tran acknowledged the value of the existing defense cooperation mechanisms, such as the policy dialogue between their defense ministries, it said.

They also “called on their defense officials to identify new avenues to deepen and intensify cooperation in line with the vision of the strategic partnership,” it said.

The two leaders also called for the establishment of a security dialogue between the Ministry of Public Security of Vietnam and the National Security Council of the Philippines.

They urged expedited negotiations for bilateral agreements on extradition, mutual legal assistance in criminal issues and transfer of sentenced criminals.

The statement said the two countries would bolster existing maritime cooperation mechanisms, such as the hotline between their coast guards.

It said Mr. Duterte and Tran agreed to “adopt other measures to ensure the safety and security of fishermen from both countries as well as to solve amicably the unexpected incidents at sea.”

They also agreed to form a joint working group and implement a memorandum on agreement on fisheries cooperation signed in 2010, it said.

China has been accused of bullying fishermen from its smaller neighbors, including the Philippines and Vietnam, who venture into disputed waters in the South China Sea.

The Philippines and Vietnam will also “consider signing a mutual recognition agreement on quality control and management and safety of agricultural and fishery products, and a memorandum of understanding on education cooperation,” the statement said.

The two leaders called on businesses to further increase the volume of two-way trade and investment by making the business environment in both countries conducive to investment.

The two countries will also consider extending the memorandum of agreement on rice trade and convene the 2nd Joint Commission on Trade. With a report from Allan Nawal, Inquirer Mindanao/TVJ