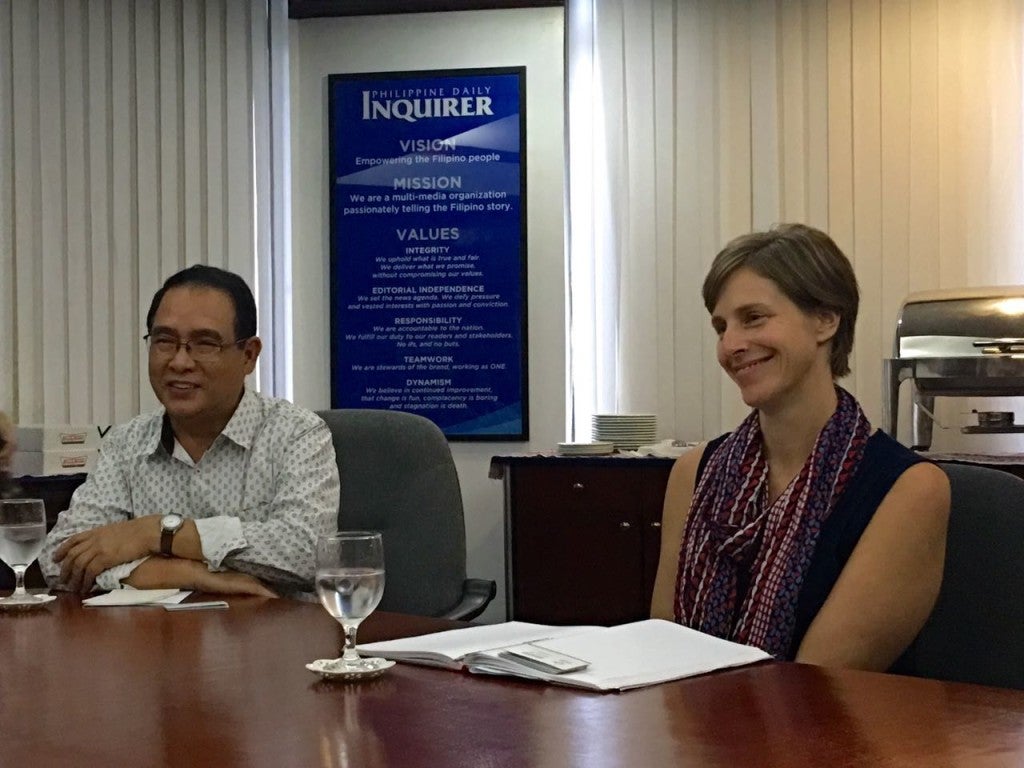 New US embassy spokesperson Molly Koscina talks about US-PH relations during a visit to the Inquirer offices on Wednesday. She is accompanied by US embassy information officer Leandro “Nonong” Llave. PHOTO BY JULIET LABOG-JAVELLANA/INQUIRER CENTRAL DESK

The US Embassy has maintained that its relations with the Philippines are on a “business as usual” status until it receives official notice about changes in President Rodrigo Duterte’s foreign policy.

“We have not received any official communication from the (Philippine) government,” new US Embassy spokesperson Molly Koscina replied in a text message to the Inquirer Thursday.

Koscina was reacting to Duterte’s latest pronouncement indicating his dislike of the US, the Philippines’ biggest economic and military ally.

In a speech before the Filipino community in Vietnam where he was on an official visit, Duterte said: “This will be the last U.S. and Philippine military war games. I am serving notice to the Americans. I will not join naval patrols.”

Koscina discussed the incoming war exercises during her visit to the Inquirer offices on Wednesday afternoon, hours before Duterte made the announcement in Hanoi.

Koscina said the US side was expecting the war games to start next week as scheduled, noting this year would be the 34th year the two allies would be undertaking the military exercises.

Duterte  earlier announced he wanted the US forces out of the country and that he would open new alliances with China and Russia.

“We heard the same thing you heard and then we heard the statements of (Foreign) Secretary (Perfecto) Yasay,” Koscina said, noting the clarifications Yasay made on the President’s statements.

So in the absence of any written, official communication from the Philippine government, Koscina said they will honor long-standing diplomatic ties.