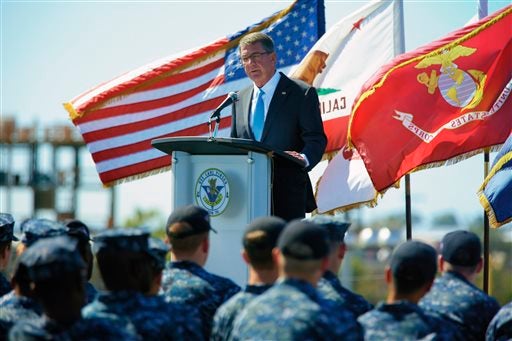 Secretary of Defense Ash Carter speaks to sailors on the flight deck of the USS Carl Vinson, Thursday, Sept. 29, 2016 at Naval Air Station, North Island in Coronado, Calif. Defense Secretary Ash Carter on Thursday said the U.S. will “sharpen our military edge” in Asia and the Pacific in order to remain a dominant power in a region feeling the effects of China’s rising military might. Carter made the pledge in a speech aboard the aircraft carrier USS Carl Vinson in port in San Diego. (Nelvin C. Cepeda/The San Diego Union-Tribune via AP)

The Pentagon chief’s remarks came as he headed for a security summit in Hawaii, where concerns about Philippine President Rodrigo Duterte, China’s continued military expansion in the South China Sea, and the return of Islamic State group jihadists to the region were high on the agenda.

“As it has been for decades, our alliance with the Philippines is ironclad,” Carter said, addressing troops aboard the USS Carl Vinson aircraft carrier, docked in San Diego.

Duterte on Wednesday said he would soon end joint military exercises with the United States, a symbolic blow to a military alliance dating back more than 60 years.

“I will serve notice to you now, that this will be the last military exercise, jointly Philippines-US, the last one,” Duterte told several hundred Vietnam-based Filipinos during a rambling address in Hanoi as he started a trip to Vietnam.

Such a move could further dampen relations with Manila’s longtime ally after the firebrand leader — who has also called for US special operations forces in the country’s south to leave — branded US President Barack Obama a “son of a whore” and extended overtures to China.

The US-Philippine alliance has “had its ups and downs and survived,” one official said, speaking on condition of anonymity to discuss the matter.

“It’s going to continue to survive based on what we think are strong US-Philippine common security interests.”

As for the military exercises, “we can be flexible about when and if they happen again,” the official added.

Carter is set to meet his Philippine counterpart, Delfin Lorenzana, in Hawaii on Friday, where the Pentagon chief is hosting an “informal” meeting for defense ministers of the Association of Southeast Asian Nations (ASEAN).

Previous summits have tended to focus on China and its growing reach across the South China Sea.

Carter stressed, as he has repeatedly, that the US military will ignore Beijing’s contentious South China Sea claims, and keep operating in waters and airspace surrounding the islands.

“We hope that China chooses to join the rest of the region in strengthening and upholding the shared principles that have helped so many nations around the region, including China, to rise and prosper,” he said.

An international court in July ruled against China’s sweeping South China Sea claims, prompting a furious reaction from Beijing, which promptly vowed to ignore the decision.

Carter’s trip to Hawaii comes with less than four months of the Obama administration remaining.

A key question will be future plans for America’s “rebalance” to Asia, during which Obama has tried to shift the US focus away from Middle East quagmires and toward rapidly growing Asia.

He has mended relations with Myanmar, Vietnam and Laos while bolstering regional blocs and providing a counterbalance to China’s regional ambitions.

Several nations in the region, including Indonesia, Malaysia and Singapore are also concerned about the return of jihadists from the Middle East as the Islamic State (IS) group loses territory in Iraq and Syria.

The defense official said probably about 1,000 or fewer Southeast Asians are in Syria and Iraq, and “hundreds” have already returned to their home countries.

“Local governments certainly are very concerned about the possibility of a rise in ISIL-related violence, it is very high on their agenda when they speak to us,” the official said, using an acronym for the IS group.

Regional allies are sure to ask Carter about the upcoming US election, which has seen a tightening race between Donald Trump and Hillary Clinton.

Trump has called into question the mutual defense treaties with Japan and South Korea, which have provided the cornerstones of US policy in Asia since World War II.

The defense official indicated he was confident America would retain its Asia focus whatever the election’s result.

“We’ve got a good thing going with the establishment of this principled, inclusive security network,” he said.

“There are a lot of opportunities left over. And we want to make sure that our position in the region is solid for the next president.”/rga