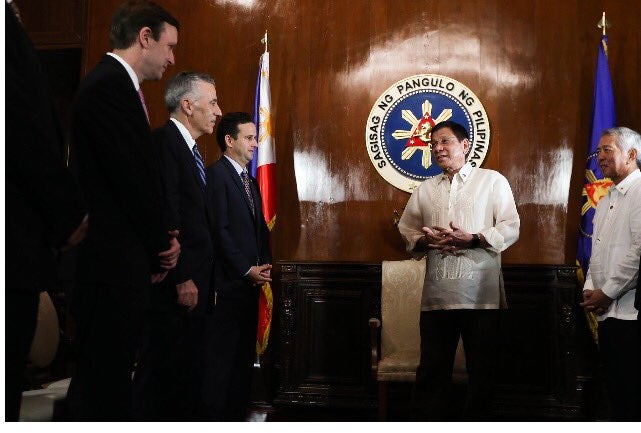 President Rodrigo Duterte welcomes the US delegation led by Ambassador to the Philippines Philip Goldberg in Malacañang. PHOTO FROM PRESIDENTIAL PHOTOGRAPHERS DIVISION

A US senator who was part of the congressional delegation that met with President Rodrigo Duterte on Tuesday said the Chief Executive assured them that the Philippines will not trade its rights to China over maritime disputes, following a favorable ruling from the Permanent Court of Arbitration.

Connecticut Senator Christopher Murphy took to Twitter to share a few details of their meeting with Duterte in Malacañang.

Murphy said Duterte told them that the decision of the UN-backed Hague court affirming the Philippines’ sovereign rights and junking China’s claims to almost all of the disputed and resource-rich South China Sea was “non-negotiable.”

“In Manila – just out of meeting with new Philippines President Duterte. Assured us he has no plans to negotiate with China over islands dispute,” Murphy said.

“We were first US elected officials to meet with Duterte. Says he will not trade territorial rights to China. Tribunal decision non-negotiable,” he added.

Murphy was part of the US delegation that paid a courtesy call on Duterte at the presidential palace, including US ambassador to the Philippines Philip Goldberg, Florida representative Ted Deutch, and Hawaii Senator Brian Schatz.

Duterte was also set to meet with US Secretary of State John Kerry in bid to strengthen ties between the US and the new administration.

The President earlier asked former president Fidel Ramos to be the country’s special envoy to China, but the latter has yet to accept the offer.

READ: FVR still undecided to be special envoy to China

He also noted that the interests of allies, particularly the United States, would be taken into consideration as the government eyed bilateral talks with China after the country’s landmark arbitration victory.

READ: Duterte: Allies’ interests to be considered in talks with China

Foreign Affairs Secretary Perfecto Yasay has junked an offer by his Chinese counterpart to hold negotiations “outside of and in disregard” of the international tribunal’s ruling, which concluded that “there was no legal basis for China to claim historic rights to resources within the sea areas falling within the ‘nine-dash line.’” IDL