Duterte meets with US delegation, Goldberg 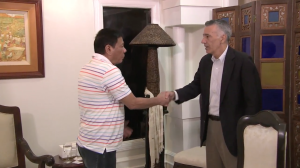 In this June 13, 2016 file photo, President Rodrigo Duterte meets with Ambassador Philip Goldberg of the United States who congratulated him on his election win.  (INQUIRER FILE PHOTO)

MANILA — President Duterte met with United States Ambassador Philip Goldberg and members of a US congressional delegation who visited him at the Malacañang Palace on Tuesday.

Defense Secretary Delfin Lorenzana and Defense Assistant Secretary Raymund Jose Quilop also met with members of the US congressional delegation at the Palace.

Also on Tuesday Manila Archbishop Luis Antonio Cardinal Tagle came to see the President in the Palace. Joining him was Archbishop Romulo Valles.