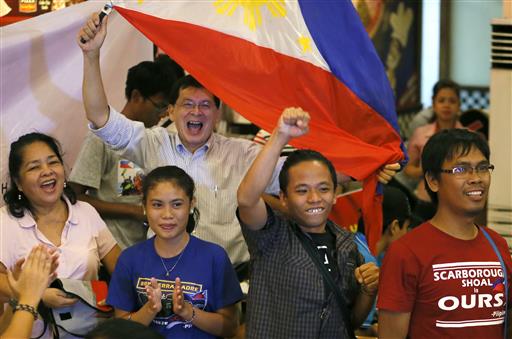 Filipinos applaud moments after the Hague-based U.N. international arbitration tribunal ruled in favor of the Philippines in its case against China on the dispute in South China Sea Tuesday, July 12, 2016 in Manila, Philippines. The tribunal has found that there is no legal basis for China’s “nine-dash line” claiming rights to much of the South China Sea. The tribunal issued its ruling Tuesday in The Hague in response to an arbitration case brought by the Philippines against China. AP Photo

The Philippine government is studying the decision of the United Nation’s Permanent Court of Arbitration (PCA) on the South China Sea dispute and will release “a complete and thorough interpretation” in five days.

“We shall wait for [the solicitor general’s] interpretation of the ruling,” Presidential Communications Secretary Martin Andanar said in a text message Tuesday night.

The Hague-based PCA on Tuesday (Manila time) ruled in favor of the Philippines, saying that China’s historic claim on the disputed waters is “invalid.”

“The decision just came out. So it is and will still be studied,” the Presidential Communications Office said in a separate statement.

During the Cabinet meeting on Tuesday night after the landmark decision, Malacañang officials said Calida briefed the Cabinet members about the UN ruling.

Presidential spokesman Ernesto Abella said the government would exercise restraint and sobriety as it studies the decision of the PCA.

“The ruling was welcome, and the government will proceed with sobriety and restraint,” Abella said in a text message on Wednesday, echoing the earlier statement of Foreign Affairs Secretary Perfecto Yasay. IDL