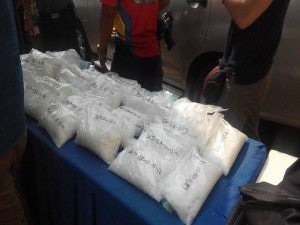 CAMP OLIVAS, Pampanga—A suspected member of a West African drug syndicate was caught with P1-million worth of shabu (methamphetamine hydrochloride) on Tuesday night and has been detained here since then.

Okoye, a 33-year-old Nigerian who went by the alias Martin, was arrested in a buy-bust operation at a restaurant in Marikina City, PDEA Central Luzon director Emerson Margate said.

Margate said the syndicate has been operating in Metro Manila and Central Luzon provinces.

Okoye used football coaching in the country to “camouflage his illegal activities.” He has been living in the Philippines for two years now.

Read Next
PH gov’t to release interpretation of UN ruling in 5 days
EDITORS' PICK
Apple warns of flaw that lets hackers into iPhones, Macs
Heads may roll at BOC, says Palace if sugar smugglers are allowed to use recycled import permits
vivo brings to the Philippines a powerful smartphone with a slimmer body, the vivo Y02s for only PHP 6,499
House energy committee chair Arroyo bats for cheap electricity
What to watch out for when selecting a video surveillance solution
46% of schools nationwide to have full face-to-face classes on Aug. 22
MOST READ
LOOK: Miel Pangilinan dazzles in glittery pre-debut shoot
DepEd to give teachers P5K cash allowance within first week of classes
Suspect in rape-slay of teenaged biker arrested in Camarines Sur
Mayor bares issues vs closed QC school
Don't miss out on the latest news and information.