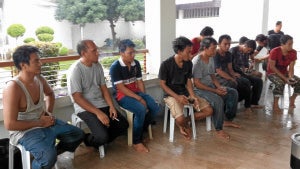 ZAMBOANGA CITY — Ten Indonesians were freed by their Abu Sayyaf captors in Sulu on Sunday noon.

Supt. Wilfredo Cayat, police chief for Sulu, confirmed the release of the 10 Indonesians, but could still not give details.

“We were informed there were anonymous (unidentified) people who dropped the Indonesians just in front of the house of Sulu Governor (Abdusakur) Toto Tan (II),” Cayat said.

“They were brought inside, they were fed. Governor Tan called me and they turned over the 10 to our custody. We are preparing now to bring the 10 to Zamboanga and turn them to their consular official,” Cayat told the Philippine Daily Inquirer by phone.

Sulu Gov. Abdusakur Tan II, in a statement, said his security guards were first to notice the Indonesians outside his home in Jolo town.

The governor then told the Indonesians to enter his home, where they were fed fried chicken, fish and rice.

Tan then called the military and police about the freed Indonesians.

He said the freed kidnap victims were brought to an Army base were they underwent medical examinations.

Cayat said the freed captives were crew members of a tugboat. They were abducted off the waters of Sulu on March 28. 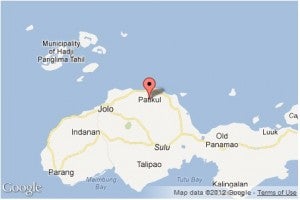 But a public official who requested anonymity due to the sensitivity of the information said a P50-million ransom was paid to the kidnappers.

“They were supposed to be freed between Friday and Saturday somewhere in Luuk town,” the source said.

Three of his companions– fellow Canadian Robert Hall, Norwegian Kjartan Sekkingstad and Filipina Maritess Flor –remain in the hands of the Abu Sayyaf. They were taken from a marina on the Island Garden City of Samal in Davao del Norte on Sept. 21 last year.

Also still in the hands of their abductors are Malaysians Wong Teck Pang, Wong Hung Song, Wong Teck Chi and Johnny Lau Jung Hien, who were taken from Sarawak on April 1 were.

The other kidnap victims in the hands of the bandit group were Japanese treasure hunter Toshio Ito, who was kidnapped in Pangutaran, Sulu in July 2010; Dutch birdwatcher Ewold Horn, who was taken captive in February 2012 in Panglima Sugala, Tawi-Tawi; Chinese national Yahong Tan Lim, who was kidnapped in Isabela City in May 2014; Filipino fish traders Hajan Perong and Joshuan Bani who were kidnapped in Bongao, Tawi-Tawi on June 2, 2014; and Filipino businessman Dennis Cabadunga, who was taken in Labason, Zamboanga del Norte in May 2015.  (Julie S. Alipala, Inquirer Mindanao) SFM

Read Next
10 Indonesian hostages freed by Abu Sayyaf in Sulu
EDITORS' PICK
‘Justice will be done,’ Duterte assures as he vowed probe on Jolo incident to bare ‘truth’
EuroMillions Superdraw: A lottery draw unlike any other is coming to the Philippines
Current dominant strain of COVID-19 more infectious than original—study
DOLE: Return of OFWs’ remains from Saudi to be ‘delayed,’ deadline moved to ‘early next week’
Smart releases Hyun Bin’s second TVC
Water remains our saving grace right now
MOST READ
Locsin warns of ‘severest response’ if China’s army drills in SCS ‘spill over’ to PH domain
Duterte tells military: No other president looked at you the way I did
BREAKING: Duterte signs anti-terror bill into law
Go apologizes for 5-on-5 game; PBA summons Japeth, ROS rookie
Don't miss out on the latest news and information.