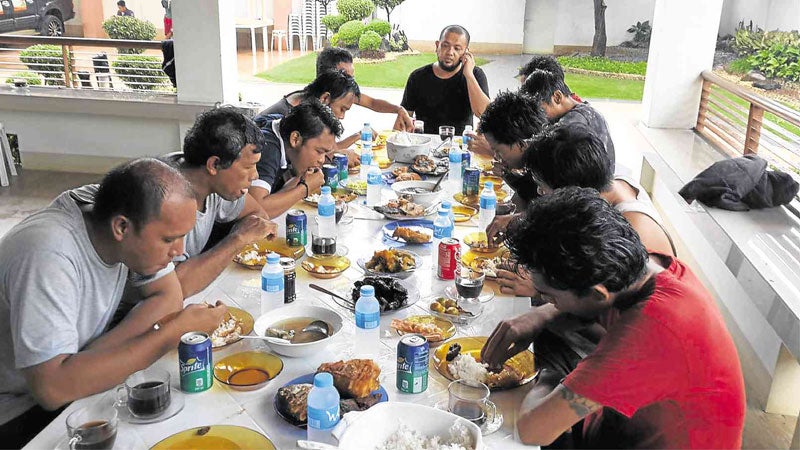 FREEDOM’S FULL MEAL Ten Indonesian sailors who were freed by the Abu Sayyaf eat a hearty meal of fried chicken, fish and rice at the house of Sulu Gov. Abdusakur Tan II in this photo he released to the Inquirer.

“The report [of their release] is confirmed. They were there. I saw them,” Sitin added.

The provincial police chief, Senior Supt. Wilfredo Cayat, confirmed the release of the Indonesians, but he declined to give any details to AFP.

Cayat told the Inquirer that Tan had turned over the Indonesians to the police.

“We are preparing now to bring the 10 to Zamboanga and turn them over to their consular official,” he said by phone.

The condition of the freed hostages was not immediately known, though Sitin said the group ate lunch at the governor’s home.

They were abducted on March 26 by gunmen described by Philippine authorities as members of the Abu Sayyaf, a small group of bandits based on Jolo and nearby Basilan Island who are accused of kidnappings, beheadings and deadly bombings.

According to the Indonesian foreign ministry, the sailors, crew members of the tugboat Brahman 12, were transporting coal from Borneo to the Philippines when speedboat-riding gunmen hijacked their vessel.

In a video posted on a Facebook page linked to the Abu Sayyaf, the bandits threatened to kill the sailors unless P50 million in ransom was paid by April 8.

The Armed Forces of the Philippines refused to deal with the bandits, invoking the government’s no-ransom policy.

Sitin said he was unaware that any ransom had been paid. The Abu Sayyaf does not normally free hostages unless a ransom is paid.

Jolo’s mayor, Hussin Amin, welcomed the release of the Indonesians, but said he was unaware whether a ransom had been paid.

“If this big release came in exchange for money, those who paid are supporting the Abu Sayyaf,” Amin said.

“This money will be used to buy more firearms and will be utilized as mobilization funds by these criminals,” he added.

But a source, who requested anonymity because he was not authorized to speak about the matter, said the P50-million ransom was paid.

Maj. Filemon Tan Jr., spokesperson for the military’s Western Mindanao Command, earlier said intelligence reports had it that the Indonesians were being held by an Abu Sayyaf band led by Alhabshi Misaya.

A Philippine Army officer who has been helping to deal with kidnappings by the Abu Sayyaf said a rebel commander from the Moro National Liberation Front, which has signed a peace deal with the government, helped negotiate with the Abu Sayyaf for the release of the Indonesians.

The hostages were escorted down from a jungle encampment in Sulu and left outside the home of the governor, who fed the freed captives, said the Army officer, who spoke on condition of anonymity because he was not authorized to talk to reporters.

When asked whether ransom was paid, the Army officer said he was unaware of any ransom payment, but added that it was hard to imagine the Abu Sayyaf freeing hostages without receiving money.

Ridsdel, 68, a former mining executive, was executed on April 25 after a deadline for a P300-million ransom expired.

President Aquino on April 27 vowed to “neutralize” the Abu Sayyaf after Ridsdel’s severed head was left outside a government building on Jolo.

The authorities said the bandits were still holding 11 other foreign hostages—four Indonesians, four Malaysians, another Canadian, a Norwegian and a Dutchman—and at least one Filipino.

The Canadian, Robert Hall, the Norwegian, Kjartan Sekkingstad, and the Filipino, Marites Flor, were seized from yachts in a beach resort on Samal Island, Davao del Sur province, in September last year.

The four Indonesians were snatched by speedboat-riding gunmen, who shot another Indonesian sailor as they intercepted two tugboats in waters between Tawi-Tawi and Sabah on April 15.

According to the Indonesian foreign ministry, the four Indonesians were taken captive after the gunmen attacked the TB Henry and the TB Cristy, which were sailing to Kalimantan from Cebu.

Six other sailors were left behind in one of the tugboats.

The fate of the four Indonesian captives was unknown. The Indonesian foreign ministry was still trying to confirm Sunday’s release of the 10 sailors.

A consular official at the Indonesian Embassy in Manila, who gave his name as Tody, told AFP: “We cannot tell you any detail as of now. It’s confidential.”

The Abu Sayyaf, a brutal bandit group, is an offshoot of a Moro separatist insurgency in Mindanao that has claimed more than 150,000 lives since the 1970s.

It is believed to have just a few hundred members but has withstood repeated US-backed military offensives against it, surviving by using the mountainous, jungle terrain of Jolo and nearby islands to its advantage.

Abu Sayyaf gangs have earned many millions of dollars from kidnapping foreigners and locals since the early 1990s.

Although the group’s leaders have pledged allegiance to the Islamic State (IS) jihadi group in Syria and Iraq, analysts say they are more focused on lucrative kidnappings for ransom than setting up an Islamic caliphate in southern Philippines.

The surge of kidnappings has sparked calls by Indonesia for joint military patrols with Malaysia and the Philippines in the high seas where the Malaysian and Indonesian sailors were seized.

Jakarta announced last week it planned to host a meeting of foreign ministers and military commanders from the three neighbors on the issue on Thursday. With reports from the wires and Inquirer Research