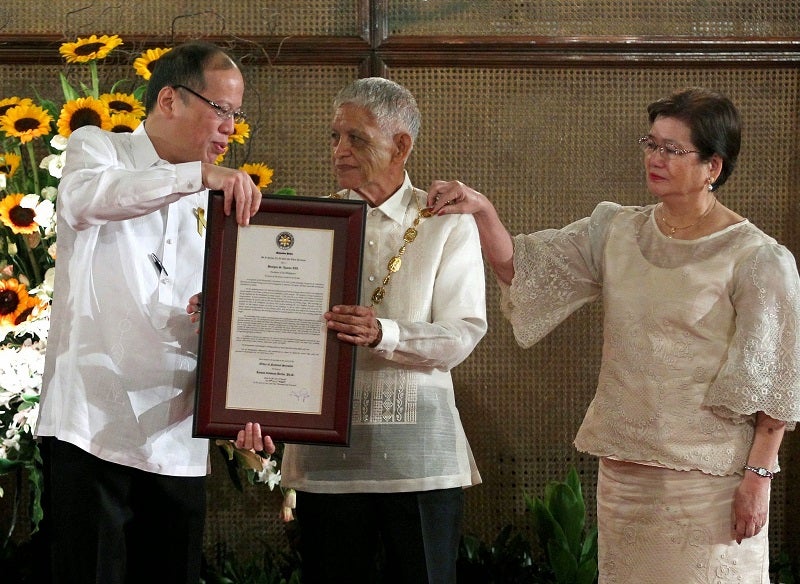 President Benigno S. Aquino III confers the Order of National Scientist on Dr. Ramon Barba, PhD. during the conferment ceremony at the Rizal Hall of the Malacañan Palace on Tuesday (August 12, 2014). Dr. Barba received the Presidential Medallion for his distinguished achievements in the field of plant physiology, focusing on induction of flowering of mango and on micropropagation of important crop species that have earned him national and international accolades. Malacañang Photo Bureau FILE

Leading the Filipino scientists on the list is National Scientist Ramon Cabanos Barba, a horticulturist known for devising a way for mango trees to produce flowers regardless of season, which paved the way for the development of the country’s mango industry.

Alcala was hailed for his research on Philippine amphibians and reptiles, while Gomez was recognized for leading the world’s first national-scale assessment of damage to coral reefs. Lagmay was lauded for leading Project NOAH, the science and technology department’s program on disaster risk reduction and management.

“The 100 distinguished scientists, innovators and leaders on this annual list come from diverse fields, ranging from the biomedical sciences to mathematics and geology. Together, they weave a rich tapestry of science and technology and provide inspiration and hope to many people around the world,” the magazine said.

To be included on the list the honoree must satisfy the following requisites: he must have received a national or international prize in 2014 or 2015 for his or her research, the prize should have been subjected to a competitive vetting process and the honoree “could have made a significant contribution in scientific discovery or leadership that has benefited either academia or industry.” JE/rga

Read Next
Beijing: US not qualified to comment on China
EDITORS' PICK
Defend Your Health! Shop health essentials from home with Rose Pharmacy’s Online Sale
COVID-19 wards in 2 more hospitals reach full capacity
Navotas will be on lockdown from July 16 to 29 – Tiangco
Water remains our saving grace right now
World-standard accounting: Unlocking your financial potential
Chatting with companions, answering calls on MRT 3 trains banned
MOST READ
Vilma Santos-Recto ‘prepared’ to face ‘consequences’ over ABS-CBN franchise vote
In slap on face of PH, China replies to Locsin on tribunal ruling: It’s invalid
ABS-CBN owners, not government to blame for network shutdown – Cayetano
Did a meme get on Agot Isidro’s nerves? She’s asking ’24 Oras’ to fact-check it
Don't miss out on the latest news and information.