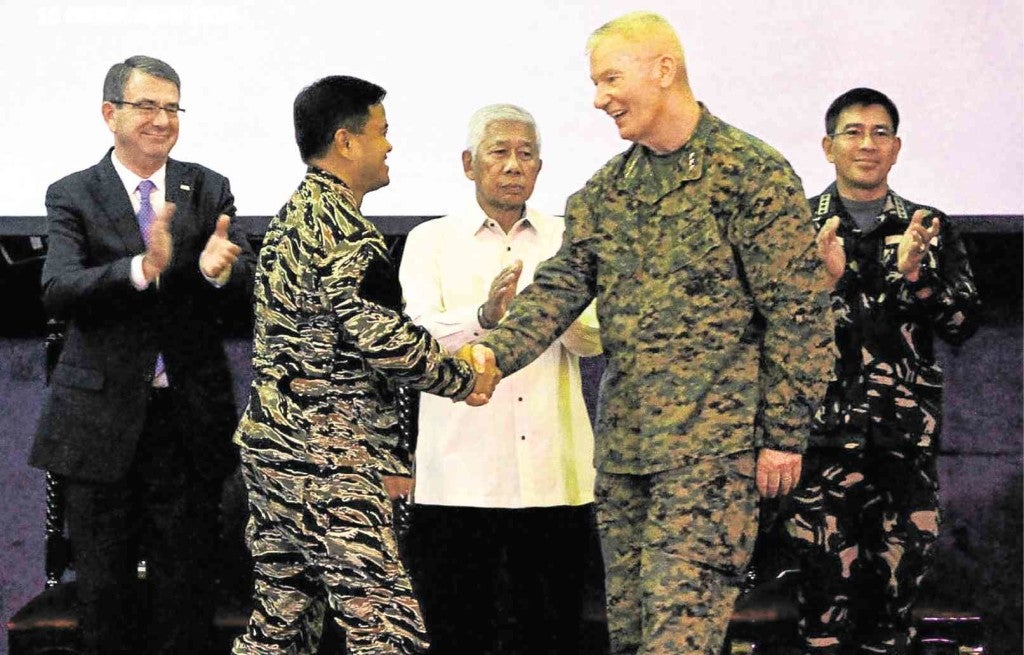 BEIJING—Responding to what it called provocative plans for stepped-up US-Philippine military cooperation, China on Thursday said it would “resolutely defend” its interests and accused the two longstanding allies of militarizing the South China Sea and harboring a “Cold War mentality.”

The comments of China’s defense ministry came shortly after Thursday’s announcement that the United States would send troops and planes to the Philippines for more frequent rotations and would increase joint sea and air patrols with Philippine forces in the hotly disputed South China Sea.

In a move likely to further anger Beijing, US Defense Secretary Ashton Carter on Friday  visited an aircraft carrier—a potent symbol of US military might—in the South China Sea as part of his current visit to the region, which does not include a stop in China.

“The joint patrols between the United States and the Philippines in the South China Sea are militarizing the region and are nonbeneficial to regional peace and stability,” said a statement posted to the ministry’s website late Thursday.

“The Chinese military will pay close attention to the situation, and resolutely defend China’s territorial sovereignty and maritime interests,” the statement said.

China claims virtually the entire South China Sea as its territory and is building artificial islands there topped with airstrips and other infrastructure.

The Philippines, Vietnam, Brunei, Malaysia and Taiwan also claim territory controlled or claimed by China and increased military and coast guard deployments by all sides could increase the potential for conflict.

China has constructed artificial islands on reefs in the Spratly archipelago, close to the Philippines, Malaysia and Vietnam, in waters that are home to some of the world’s most important shipping lanes and where islets, reefs and atolls are believed to be sitting atop vast oil and natural gas reserves.

The Chinese defense ministry’s statement also referenced China’s longstanding opposition to US military alliances in the region. It regards those as a form of unwelcome interference that stymies its desired status as the preeminent military power in the Asia-Pacific region.

“Strengthening the US-Philippine military alliance … is a sign of a Cold War mentality that is unbeneficial to peace and stability in the South China Sea,” the statement said.

Carter announced the joint patrols in Manila on Thursday, the last day of annual war games between the US and the Philippine militaries, which saw the participation of 9,000 US and Filipino troops and live-fire exercises with an advanced US long-range missile system that may be deployed to defend Philippine territory under a new security deal between the longtime allies.

The South China Sea dispute also featured in talks between Chinese Premier Li Keqiang and Malcolm Turnbull, the prime minister of close US ally Australia, which is trying to balance security needs with its economy’s reliance on the Chinese market.

“We’ve always had good and constructive discussions but our position is that all claimants, all claimants, should settle disputes peacefully and in accordance with international law,” Turnbull told reporters in Beijing on Friday, a day after his meeting with Li.

Beijing and Washington have repeatedly traded accusations over who is responsible for raising tensions in the South China Sea, with the United States citing China’s island-building project and efforts to block other disputants from parts of the crucial waterway, through which passes more than $5 trillion in global trade passes each year.

China says its island developments are mainly for civilian purposes and says US naval activities—especially the sailing of ships close to its newly built islands—threatens China’s security.

“The US has been taking all kinds of actions to provoke China, forcing it to take counteractions that will result in an escalation of the situation,” Su Hao, an international relations expert at Beijing’s China Foreign Affairs University, told The Associated Press.

“The joint patrols are part of the US plan and now the plan is being implemented,” Su said.

Chinese media speculate that could involve Japan, China’s historical nemesis with which it is feuding over ownership of a string of uninhabited Japanese-controlled islands in the East China Sea.

“The continuous escalation of the situation will offer the US better excuses and more opportunities to strengthen its military presence in the South China Sea, so as to turn the South China Sea into a region of military confrontation,” Su said. Reports from AP and AFP/TVJ