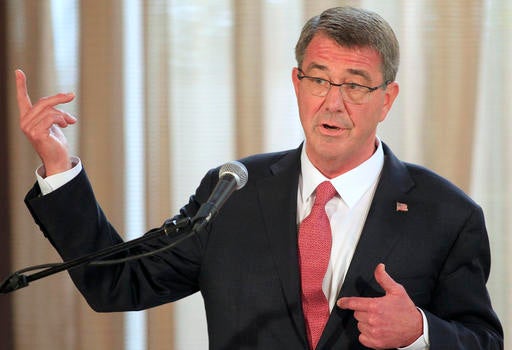 U.S. Defense Secretary Ash Carter gestures during a joint press conference at the Malacanang presidential palace in Manila, Philippines on Thursday, April 14, 2016. The United States on Thursday revealed for the first time that American ships have started conducting joint patrols with the Philippines in the South China Sea, a somewhat rare move not done with many other partners in the region. AP PHOTO

“Later today, I will visit the aircraft carrier USS John C. Stennis, sailing in the South China Sea, after some of its sailors and Marines participated with you in Balikatan,” Carter said in Manila, referring to annual war games with the Philippines that ended Friday.

Carter’s trip to the warship is the latest move by the United States to show it is committed to maintaining security in the flashpoint waters, where China has built artificial islands on islets and reefs close to the Philippines and other Southeast Asian nations.

Carter announced on Thursday that the US had launched joint naval patrols with the Philippines in the South China Sea, as he spoke of growing concern about China’s “land reclamation” and “militarization” of the area.

He also said the United States would deploy hundreds of troops, as well as five warplanes, to the Philippines.

China reacted immediately to the announcements on Thursday, warning the US actions were damaging regional stability.

On Friday, Carter emphasized the United States would back up the Philippines and other allies in the region.

“At a time of change in this dynamic region, and democratic transitions in the Philippines and the United States, we will continue to stand shoulder-to-shoulder,” Carter said at the closing ceremony to the war games, which involved about 9,000 soldiers.

“We will continue to stand up for our safety and freedoms, for those of our friends and allies, and for the values, principles, and rules-based order that has benefited so many for so long.”

A US official traveling with Carter said the Stennis was in Philippine-claimed waters of the South China Sea on Friday.

“The Stennis has sailed in these waters many times before, and sailed not just here in the South China Sea but all around the vast Asia Pacific, six times in the last several years, so far of this deployment it has operated near the Republic of Korea, through the sea of Japan, in Guam and now the South China Sea,” Carter said.

After the closing ceremonies of the US-Philippine Balikatan exercises at Camp Aguinaldo, top defense and military officials immediately left for Villamor Air Base, where a plane will take them to Western Command in Palawan.

Carter made a similar visit last November, when he visited the USS Theodore Roosevelt in Malaysia, while transiting the disputed South China Sea.