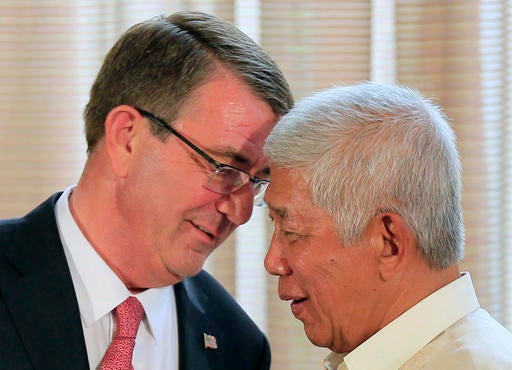 U.S. Defense Secretary Ash Carter, left, talks with his Philippine counterpart Voltaire Gazmin during their joint press conference at the Malacanang presidential palace in Manila, Philippines on Thursday, April 14, 2016. The United States on Thursday revealed for the first time that American ships have started conducting joint patrols with the Philippines in the South China Sea, a somewhat rare move not done with many other partners in the region. (Romeo Ranoco/Pool Photo via AP)

The United States and the Philippines have begun joint patrols in the disputed South China Sea under the Enhanced Defense Cooperation Agreement (Edca), US Defense Secretary Ashton Carter said Thursday.

Speaking at a joint news conference with Defense Secretary Voltaire Gazmin in Malacañang, Carter also announced that US troops and military equipment would be sent on regular rotations in the Philippines under Edca.

The enhanced security cooperation between the United States and the Philippines comes amid increasingly assertive territorial claims by China in the South China Sea.

Carter said the joint patrols in the South China Sea, a somewhat rare move for the United States not done with many other partners in the region, began last month.

“We believe that such operations will help us fulfill our priority to develop our maritime security and domain awareness, which are currently on top of our agenda,” Carter said.

The Pentagon chief, who arrived  on Wednesday on an Asian tour that included witnessing joint military exercises between US and Filipino forces in the Philippines, paid a courtesy call on President Aquino at the Palace, where they discussed the territorial dispute between the Philippines and China among other common concerns.

Carter said the joint patrols would “continue to help build our interoperability and improve the Philippine Navy even as these patrols contribute to the safety and security of the region’s waters.”

He said the United States would be keeping nearly 300 troops, including US Air Force commandos armed with combat aircraft and helicopters, in the Philippines through the end of the month.

The US plan is part of a military buildup sure to inflame tensions with China in the South China Sea, almost all of which China claims, including waters close to the shores of its smaller neighbors in the region.

Brunei, Malaysia, the Philippines, Vietnam and Taiwan have competing claims in the resource-rich South China Sea.

Washington regularly criticizes Beijing for building artificial islands on reefs in the Spratly archipelago and developing military facilities on them, including airstrips, to intimidate the other claimants.

China has rejected the criticisms, insisting it has “undisputed sovereignty” over the South China Sea, a claim that the United States has challenged by sending warships and warplanes to the disputed region on so-called freedom-of-navigation operations.

Carter said the US troops who would stay behind after the annual Balikatan war games would “lay the foundation for joint air patrols to complement ongoing maritime patrols.”

He said the US planes to be left behind were five A-10C Thunderbolt II ground attack aircraft, three HH-60G Pave Hawk helicopters and an MC-130H special operations aircraft.

Carter said he would visit the Antonio Bautista Air Base in Palawan, one of five Philippine military bases that would be opened to US troops and equipment under the Edca.

He said a command and control unit of American personnel would also remain in the country for continued training.

Carter was referring to a secure communications network of the US military.

Peter Paul Galvez, spokesperson for the Department of National Defense, said the Armed Forces of the Philippines was developing a similar communication system “so that we don’t have to rely on mobile phones anymore.”

Last week, the Pentagon announced that the United States would send about $40 million in military assistance to the Philippines to beef up intelligence sharing, surveillance and naval patrols.

Carter said the aid would include an enhanced information network for classified communications, sensors for patrols vessels and an unmanned aerostat reconnaissance airship.

The patrol sensors and surveillance equipment will help the Philippines keep a watch over its territory, including areas where there are overlapping claims in the South China Sea.

Asked if the joint patrols would be conducted in disputed areas in the South China Sea, Carter said he could not discuss operational matters.

activities to natural disasters, accidents, incidents, provocations. From the American point of view, our alliance covers all of the Philippine territory,” he said.

The US troops staying after the war games are expected to leave at the end of the month, but other US forces and aircraft would do similar rotations into the Philippines in the future.

A defense official would not say how frequently those rotations would happen, but said the size, schedule and makeup would fluctuate. The official was not authorized to discuss the issue publicly so he spoke on condition of anonymity.

The increased troop presence is part of a broader US campaign to expand its assistance to the Philippines, as America shores up its allies in the Asia-Pacific region.

And it comes as the United Nations Permanent Court of Arbitration in The Hagues rules in coming weeks on the Philippines’ challenge to China’s sweeping claims in the South China Sea.

China has said it will not recognize any ruling by the court and proceeded to build outposts in the Spratlys in anticipation of the tribunal’s decision. With a report from AP

US: IS group could be emboldening Filipino militants

Read Next
US fires long-range missiles in Balikatan war games
EDITORS' PICK
Duterte blasts rights groups for overlooking the ‘other side’ of drug war
Next level mobile photography within reach with vivo X70 co-engineered with ZEISS
Delivering delight against all odds
Lacson wants DOF to suspend TRAIN law as oil prices rise
153 protests filed vs China actions in PH waters in 2021 — DFA
Leaked: A 60x Zoom and all-new Helio G96 mean a complete overhaul for TECNO Mobile’s new CAMON 18 series
MOST READ
Robredo to supporters: Be calm, gentle and do good deeds
Duterte inaugurates P684-M bypass road project in Quezon
Matibag calls Senate budget hearing ‘political,’ gets kicked out
Duterte: No drug dealers among the rich in PH
Don't miss out on the latest news and information.