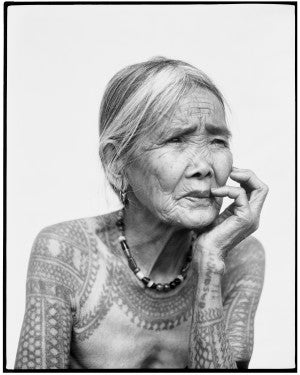 RED DEER, Alberta – A glimpse of this Kalinga woman’s wealth in tattoo art could be seen in the depths of her pensive look, captured in her now famous photo that caught the eyes of the Royal Ontario Museum organizers.

The image of the tattooed Apo Whang-od Oggay was a public favorite, according to Chris Darling, co-curator of the exhibit entitled “Tattoos: Ritual. Identity. Obsession. Art.” at the Royal Ontario Museum.

Darling said the image was selected among a number of images from the Tattoo exhibit at the Musee Du Quai Branly in Paris, which ran from May to October in 2015.

“The ROM marketing department selected a number of images from the Paris show to use for publicity purposes. Based on surveys of the public [it] was a favorite, and we decided to use this as one of our main publicity and marketing images,” he said.

Although the exhibit organizers had used the image in an offsite event in January, they knew nothing about 98-year-old Apo Whang-od Oggay, until a visitor informed them that she was the master tattoo artist of the mountain village of Buscalan, Kalinga.

They were then directed to Apo Whang-od’s facebook page that contained a mosaic of her work, articles and documentaries showcasing the lone mambabatok of Buscalan, in Tinglayan town.

Interest in the 98-year old master tattoo artist grew because she is the only one left of her kind in Kalinga, noted Darling. “She is one of the last master Kalinga tattooists and she is also trying to preserve this tradition by teaching other Kalingans how to tattoo,” he added.

Apart from the iconic image taken by Jake Verzosa in 2011, a video that captures her tattooing in Buscalan is also featured in the exhibit along with six others that show traditional tattooing in the Pacific region. 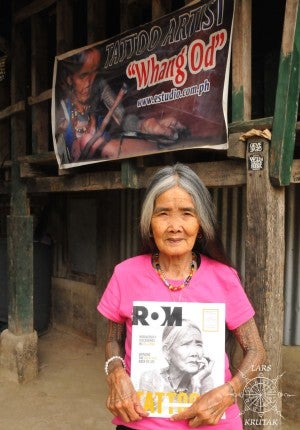 Darling said the exhibit will include an art installation outside the Royal Ontario Museum, which will feature large format photos of Kalinga women.

“This exhibition traces tattoos across continents and over time, examining tattoo artists and the tattooed, and exploring the factors that have made tattooing an important cultural practice, a compelling art form, and a worldwide modern phenomenon,” said an introduction to the exhibit.

Poupou, a carved ancestral panel from the Royal Ontario Museum Anthropology collection, is an impressive architecture from a Māori meeting house with carvings of tattooed ancestors and ancestral history, according to Darling.

Still from New Zealand, a land grant penned by a Māori chief using his tattoo is showcased. “Māori chiefs had full-face tattoos (moko) and could draw their facial tattoos accurately from memory and would use their moko as signatures on land grants and deeds,” Darling explained.

The tattoo exhibit, which started on April 2 and running until September 5, has received rave public reception so far, Darling said.

“Most visitors say that they did not know that tattoos and tattooing was such a diverse, fascinating and complicated topic, that it is much more than the current global phenomenon of body art,” he noted.

Meanwhile, an online petition to declare Apo Whang-od a National Artist of the Philippines had gathered some 11,000 shares in October last year. Sen. Miriam Santiago made a similar call in 2015 by passing a Senate resolution to nominate Apo Whang-od as a National Living Treasure.

Acknowledging that she may be the last mambabatok in the Cordilleras, Apo Whang-od has begun teaching her great niece the tattoo technique, accounts on her facebook page stated.

The batok tradition of tattooing, said to date back one thousand years, employs charcoal and water as ink. In her videos, Apo Whang-od can be seen using a stencil to mark the skin. Using a pomelo thorn attached to a wooden handle, she taps her designs cutaneously.

Batok designs were meant to enhance the beauty of women in her tribe, while tattoos on men were symbols of power and prestige.