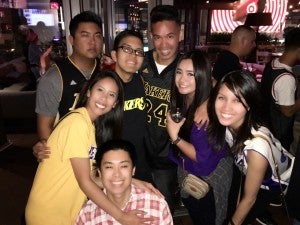 LOS ANGELES — For thousands of Filipino American families in this city, Kobe Bean Bryant has been their offspring’s childhood hero. And when the cost of Bryant’s 1,346th and final regular-season game tickets became prohibitive, some of this young generation counted on familial support for another “goMomDadFundMe.”

“I could not have come here to see this storybook ending to Kobe’s career without help from my parents, my girlfriend and my brother, said Leo O., 29, of North Hollywood, who has been a fan since he could learn to play ball at age five. “I told them I’d pay them back next year.” His salary as a medical assistant was just not enough for the cheapest ticket.

Leo’s uncle, Vergel O., a retired AT&T employee and who celebrated his 62nd birthday outside the stadium, remembered how 20 years ago neighbors would call Leo’s house whenever the Lakers lost a game to check on his then-young nephew. “Has Leo stopped crying?” they would ask sympathetically. 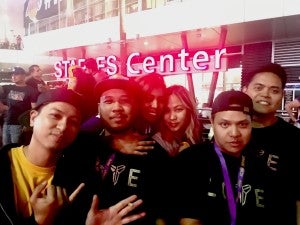 Vergel said he had insisted that his two children, Melissa and Mark, both in their 30s, save up early for the tickets as he wanted them to come to this “end game and make their own memories that they would cherish and reminisce for the rest of their lives.”

Paying $729 for a nosebleed seat at the Staples Center, Leo led a dozen childhood friends and siblings to LA Live!   A few of them grew up playing together as a team on school competitions in San Fernando Valley.

On Wednesday, six got to watch the game inside and the rest hung out outside the stadium, content to watch via big screens as Kobe led the Lakers to a 101-96 victory against the Utah Jazz.

Leo sat away from his brother Joe and the latter’s girlfriend Kimmie, who got separate seats in the upper end of the stadium, all financed through various means like Christmas gifts and working overtime shifts.

Lloyd, 29, from West Los Angeles also bought tickets with help from his mother and a friend who commented, “This game is a bit melancholy and happy. I don’t know how to digest this tomorrow, but it’s right for Kobe to go on this high note. It’s kinda poetic.” 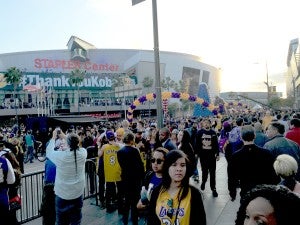 Crowd that didn’t get in milling around Staples Center. MARIA BUNAG

Anthony Mendoza, 29, from Van Nuys and Jag G., 29, have been Lakers fans since they were eight and nine, respectively, and they were with hundreds of other fans who went bar-hopping at LA Live! to watch the game and take pictures in front of Staples because they couldn’t afford the tickets.

“We’ll still be loyal Lakers without Kobe, said Anthony who is a hip hop performer in the Valley. But I will always miss his ‘gimme, gimme attitude’ about the ball!”

Maria B. of Cerritos joined others watching the game outside from an LA Live! bar and became emotional as she watched the Nike commercial from a Staples outdoor screen that has a satirical twist about Kobe’s love-hate relationship with fans and foes.

Her message to Kobe: “On your last game, I’m filled with mixed emotions — sadness that I won’t get to see you play anymore, but happiness that I was able to witness greatness for 20 years. Heroes get remembered but Legends never die.” She shelled out part of her friend’s ticket fare “because this game means a dream come true for him.”

Maria and her boyfriend both attended the last Clippers vs. Lakers game April 6. “The Lakers didn’t win but we won $50 worth of ‘Wing Stop’ and also got free tacos for six weeks,” she exclaimed. Tickets then cost them $200 apiece.

Meanwhile, those who watched the festivities outside Staples Center, joined many families in taking souvenir photos, going to the restaurants to watch the game and “just enjoying the moment.” 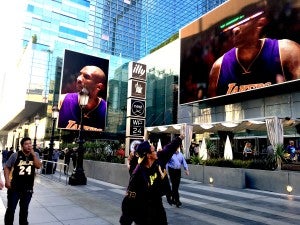 “It was enough to see our children get inside the stadium and personally witness history made by Kobe’s amazing 60 points on an NBA-record 50 shots,” said Vergel of the fairytale ending.

Most of those interviewed said they looked forward to second-year player Filipino American Jordan Clarkson taking lessons from Kobe. After all, during his farewell game, Kobe mentioned being optimistic about the former Wizards’ ability, together with the other “young guys,” in the franchise. “I’d be working with Jordan, talking to them, in Orange County,” Kobe told the press.

In the end, with five minutes left in the fourth quarter, Kobe threw an outlet pass assist to Jordan Clarkson for a dunk. “It was like Kobe passing on the baton to Clarkson,” said Reggie, a young tennis instructor from Brea, Orange County.

Clarkson, who started playing in 9th grade, said in an interview: “I was glad to have given the last shot for Kobe…I will miss his leadership. I will remember most his work ethic and how he gave himself to the game.”

Some fans tweeted about the price of the tickets and said they ran a GoFundMe page all year to raise money so they could get a ticket for Kobe’s last game. They got to go to the game.