A group of Filipino tourists in Indonesia were elated to ride a taxi cab driven by a cabbie who they claimed looks like Vice President Jejomar Binay.

Cess Barcenas and her friends met the Binay look-alike taxi driver during their recent trip and, upon their amusement, posted a video of them chanting the famous campaign jingle of the vice president, “Only Binay.”

In her Facebook Post, Barcenas accompanied photos of the cab driver with a humorous news story parody of the vice president that says that in an apparent change of heart, he (Binay) has thrown the towel early in the presidential fight.

The news parody continued with Binay supposedly endorsing the candidacy of former Interior Secretary Mar Roxas in exchange for Roxas’s administration, in case he wins, to turn a blind eye on the alleged corruption issue against Binay.

Binay was also quoted in the news parody as saying he has decided to pursue his passion to drive and has taken his alleged millions to Indonesia. The parody states:

”When asked of his future plans, the outgoing vice president quips:

“I have been working all my life and have earned a lot of money and properties but it has always been my passion to drive, now I will pursue my dream by being a Taxi driver in my new company: ‘Only Binay Taxi.

”Sources say though that Binay has also taken his millions with him to Indonesia to build a Chicken Church.

Barcenas also requested the look-alike to pose with the “Laban” sign, a significant trademark pose of the presidential candidate and former Makati mayor. 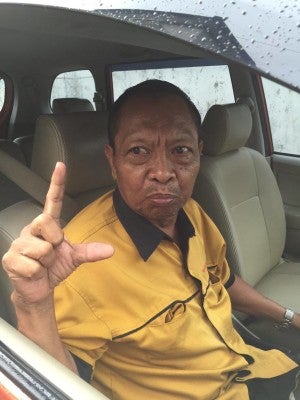