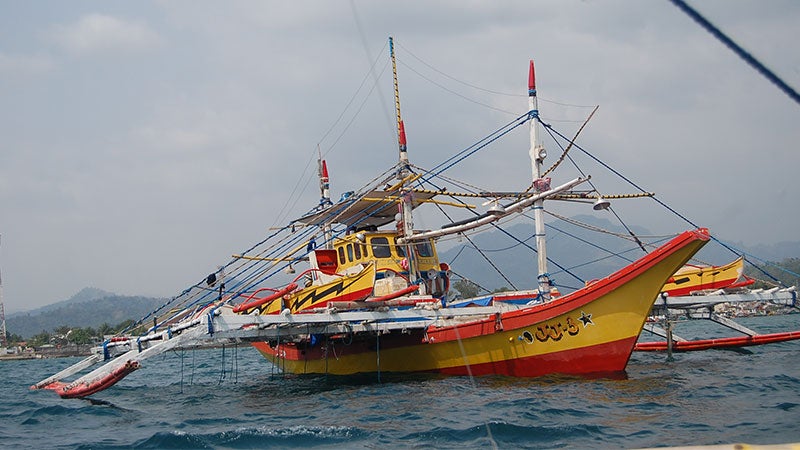 Fishing boat JJ-3 docks at the coastal water of Subic, Zambales after a two-week fishing venture in the West Philippine Sea. According to its crew, the vessel was chased and damaged by the Chinese coast guard patrolling the Panatag Shoal on March 7. PHOTO BY ALLAN MACATUNO

SUBIC, Zambales—Unfazed by their recent encounter with Chinese Coast Guards, local fishermen said they are preparing to return to the Panatag Shoal to assert their right to fish.

Fisherman Ronald Arciete, 31, said Chinese patrol boats have chased them away but that would not prevent them from returning to make a living by fishing in the shoal.

Arciete’s group arrived here on March 24 after a two-week fishing trip to the West Philippine Sea.

“[But] we will go back [to the shoal]. We are not scared, but we will be cautious. In five days or so, we will sail back to the shoal,” Arciete said on Saturday.

Arciete was part of a crew of fishing vessel, FB JJ-3, which engaged  Chinese Coast Guard vessels by pelting them with rocks.

According to him, the glass windows of their boat were shattered during a two-hour standoff with the Chinese on March 7.

“They told us to leave but we decided to stay. We threw fist-sized rocks at them to prevent them from approaching us but they also hurled stones at us,” he said.

Fishermen sail with rocks which they used to weigh down fishing lines once they reach the contested shoal located 230 kilometers from Masinloc town, Zambales province, well within the Philippines’ 370-kilometer exclusive economic zone.

It is also known as Bajo de Masinloc to residents of this coastal town.

“Panatag Shoal belongs to the Philippines and we have all the right to go there. Why should China prevent us from fishing there?” Arciete said.

“Our families are expecting us to bring home some catch after being gone for weeks. We’re doing this for our families,” he added.

The fishermen have complained that Chinese Coast Guards tried to blind them with laser lights as they drove them away from the shoal early this month.

Earlier, Junmar Pumicpic, 25, captain of the FB Bubhoy, said they were fishing near the shoal at 9 a.m. on March 5 when Chinese Coast Guards in rubber boats arrived and ordered them to leave.

Pumicpic said the Chinese rammed their boat, damaging its hull.

“One of their rubber boats carried three men in uniform. [They] approached us and told us in English to leave,” Pumicpic said.