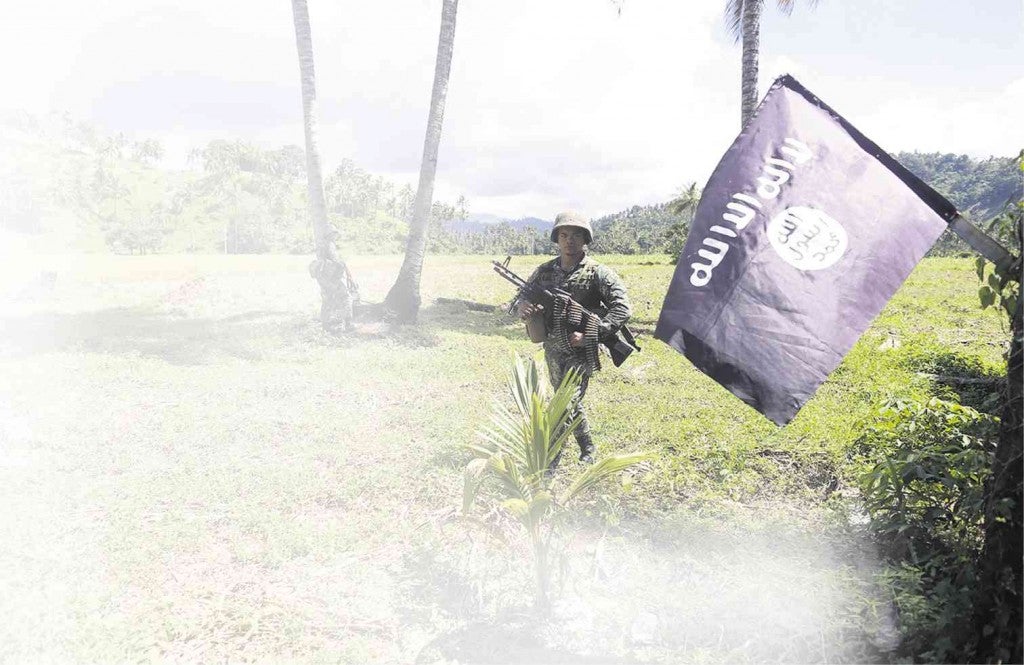 A MARINE walks past an Isis flag in a Moro rebel camp that government soldiers captured in the town of Palimbang in Sultan Kudarat province in November 2008. INQUIRER MINDANAO FILE PHOTO / JEOFFREY MAITEM

PETALING JAYA, Malaysia—Islamic State of Iraq and Syria (ISIS) has officially recognized the bai’ah or oath of allegiance from southern Philippines-based militant groups although it has yet to make an official “wilayat” or province in the South-East Asian region.

According to American anti-terror blog, The Long War Journal, recognition of the bai’ah could pave the way for the announcement of an ISIS province.

“But the existence of the ISIS-supporter groups and their willingness to declare bai’ah is enough worry.

“Whenever a group does so, it means it has to follow the instructions of those who they make the pledge to. This means that every single command issued by ISIS leader Abu Bakar Al-Baghdadi must be followed,” the International Islamic University Malaysia (IIUM) lecturer told The Star.

He said those who did so considered it a “religious obligation.”

“They believe that the order cannot be disobeyed or it may have a religious implication.

“The groups will pledge obedience and follow the instructions given to them. And they do so in God’s name,” he said.

Ahmad said such pledges and adherence to ISIS instructions increased the threat of potential attacks in the region.

“IS (or ISIS) has carried out attacks in the region before and encouraged its followers to continue doing so,” he said.

The group claimed responsibility for the Jan 14 Jakarta attacks which took place near the Sarinah shopping mall in the city center, in which at least eight people were killed, including four of the attackers.

Malaysia was mentioned twice in the 11th issue of ISIS’ monthly online magazine, Dabiq, for denouncing the terror group and for suggesting that home grown militants were targeting diplomatic missions in the country.