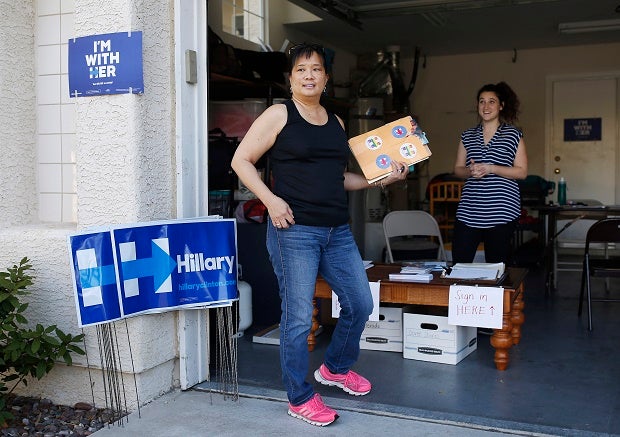 In this Feb. 12, 2016, photo, Cynthia Ameli, center, a Chinese-American, picks up materials from Sarah Gibson before heading out to canvass for presidential candidate Hillary Clinton in Las Vegas. Asian-American voters are the fastest-growing racial group in the U.S. and both parties increasingly are wooing them. AP

LAS VEGAS, United States — As Democrats Hillary Clinton and Bernie Sanders compete for every vote before Saturday’s Nevada caucuses, they are looking for support among members of the nation’s fastest-growing ethnic group. Asian-Americans comprise 6 percent of the U.S. population, and their numbers have increased 56 percent since 2000. In Nevada, Asian-Americans are 9 percent of the population.

Asian-Americans encompass a diverse range of people, among them recent Chinese immigrants, Muslims from Pakistan, Filipino-American Catholics and U.S. citizens from Hawaii. Campaigns are paying attention.

“It’s a fast-growing population, it’s young, people are getting engaged,” said Shu-Yen Wei, who helps with Asian-American outreach for the Democratic National Committee.

Since the 1990s, exit polls have found Asian-Americans voting increasingly Democratic during presidential elections, with 73 percent backing President Barack Obama in 2012. Analysts attributed that to Republican criticism of illegal immigration.

But in the 2014 midterm elections, Asian voters appeared to split evenly between Democrats and Republicans. Their numbers are small enough so that it’s difficult to rely on polling to determine their leanings. Analysts agree that most do not register with a political party, and they have among the lowest turnout rates of any group.

Nevada’s Asian-American population shows why it’s so hard to sum up the community’s politics. It ranges from dedicated union activists to anti-abortion rights Filipino-American churchgoers, sprinkled with so many who have relocated from Hawaii that Las Vegas is often called “the ninth island.”

Las Vegas financial planner Derek Uehara underscores that diversity. A registered Republican, he’s sympathetic to front-runner Donald Trump and thinks others may warm to the billionaire’s businesslike approach. “That can appeal to the Asian-American community, if the focus is on hard work and getting things done,” Uehara said. “There’s a huge opportunity here, but no one knows how to tap into it.”

Cynthia Ameli, a 57-year-old Chinese-American pharmacist, is a volunteer with the Clinton campaign. She sees the former Secretary of State as a natural fit with the Asian-American community.

“Asians are very family-oriented and want everything for their families, and I believe everything Hillary is for, is for our families,” she said.

As Nevada’s caucuses draw closer, there’s been a surge in activity aimed at attracting Asian voters. The Sanders campaign held a “multiethnic” meeting Sunday that included Asian-American community leaders. But all agree the Clinton campaign, with a robust staff in the state for months, has had the most sustained outreach with a series of Asian-American themed events: dinners celebrating a Filipino holiday, Asian-American-themed phone banks and canvasses, and more.

Changaveja argued that the former secretary of state was uniquely positioned to appeal to Asian-Americans. “She’s been in Thailand more than I have, and my mother lives in Thailand,” Changaveja quipped.

At the caucus training in Las Vegas, the Sanders campaign countered with an organizer who played a song about the Vermont senator on his ukulele, and a casino worker who is saddled with student debt and enthusiastic about the senator’s free college plan. They contend Asian-Americans will embrace Sanders.

“Asian-Americans, as they’re getting to know Sanders, they’re gravitating toward the campaign,” said Zaffar Iqbal, a physician who lives in Las Vegas and was drawn to Sanders by his call for a government-financed health care system. “This community has pretty much the same issues as any other community.”

The attention is thrilling for a group often overshadowed by Latino and African-American voters. Normally in Nevada, Asian-Americans “are the last to get any benefit,” said longtime activist Rozita Lee, 81. “We matter now, because we have the numbers.”