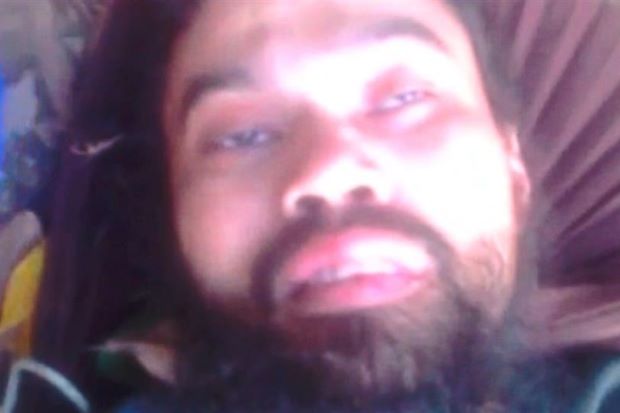 Gunned down: A screen grab of Abu Anas (Mohd Najib Hussein) in his final moments. THE STAR ONLINE/ASIA NEWS NETWORK

He was reportedly among 13 Abu Sayyaf gunmen killed in a clash with the Philippine military on Basilan island.

The 37-year-old electrical engineering graduate, who ran his bookshop at Universiti Malaya, was known as Abu Anas al Muhajir (Anas the immigrant).

In southern Philippines, he was identified as one of the emirs of the Khalifah black flag group linked to the Abu Sayyaf.

The video, released by Islamic State’s (IS) Russian speaking media channel Al Furat Media, tries to portray him as a martyr.

It opens with a group of South-East Asian militants carrying the IS flag in a forested area and reciting a pledge of loyalty to the terror group.

A narrator describes the scene in Arabic: “Abu Anas al Muhajir, one of the truthful youths of Indonesia, was befallen by harm.”

The term “Indonesian youth” used is understood to also refer to Mohd Najib.

The narrator explains that Mohd Najib traveled to the Philippines where he founded a militant group, which was among the first to swear allegiance to IS.

The video then cuts to a young man on his knees being beheaded by gunmen wearing ski masks.

“Just as Abu Anas was merciful to the believers, he was severe with the disbelievers. And when he saw that uniting the brigades and groups in the Philippines had become an obligation, he strived to bring together the oaths of the Mujahideen, and uniting them under the obedience of one Amir (leader),” the narrator says.

The caption, “Brother Abu Anas al Muhajir, Amir of the Ansar al Shariah Brigade” then appears below a mugshot of Mohd Najib.

The camera pans back to the group before changing to a battle scene recorded by what is believed to be a mobile phone.

In the video, three armed men are seen wearing vests or camouflage fatigues, and gunshots can be heard in the background.

The scene is believed to show the shootout between the militants and the Philippine military in the jungles of southern Philippines.

“Before they decided to raise the call to duty, some hypocrites informed the taghut (apostate tyrants) and led them to the Mujaideen strongholds,” the narrator says.

He adds that Mohd Najib was killed, but the militants succeeded in “killing tens of enemies, destroying war machines and helicopters.”

In another scene, a wounded Mohd Najib is seen being carried by his companions.

The camera zooms in on his face and another man is seen touching his face with a bloodied hand while saying a prayer.

According to an intelligence source, Mohd Najib, a father of five, died a few hours later, from a gunshot wound.

He was a key figure in the IS Black Flag cell led by Universiti Malaya professor Dr. Mahmud Ahmad alias Abu Handzalah, who has been hiding out with the Abu Sayyaf in the southern Philippines.

Known as Dr. Mahmud’s right hand man, Mohd Najib was believed to have been running a “IED SME” (Improvised Explosive Device, Small Medium Enterprise) factory in the Philippines and had been using the Abu Sayyaf hideouts in Basilan and Jolo as bases for IS operatives in South-East Asia.

Mohd Najib fled Malaysia with Dr. Mahmud, 36, and several other IS terror suspects in July 2014.

It was learnt that Mohd Najib had performed the Bai’ah (oath of allegiance) to support IS, with other Abu Sayyaf members.

The authorities also believe that he was responsible for arranging safe passages for four Malaysian militants to Syria to join IS.

Dr. Mahmud was not with the group at the time of the shootout.