A welcome ceremony was held in honor of the imperial couple, who arrived in Malacañang at around 10:30 a.m.

After being greeted by Aquino, with sister Corazon “Pinky” Aquino-Abellada serving as first lady, and being re-introduced to Cabinet members, the emperor and empress were escorted to the Reception Hall to sign the Malacañang guestbook.

Emperor Akihito was seen waiting for the empress, who was walking with Abellada several steps behind.

Inside the Palace, the couple saw portraits of former presidents Emilio Aguinaldo and Diosdado Macapagal, who they both met during their visit to the Philippines in 1962.

They are scheduled to have a private meeting with Aquino afterwards. 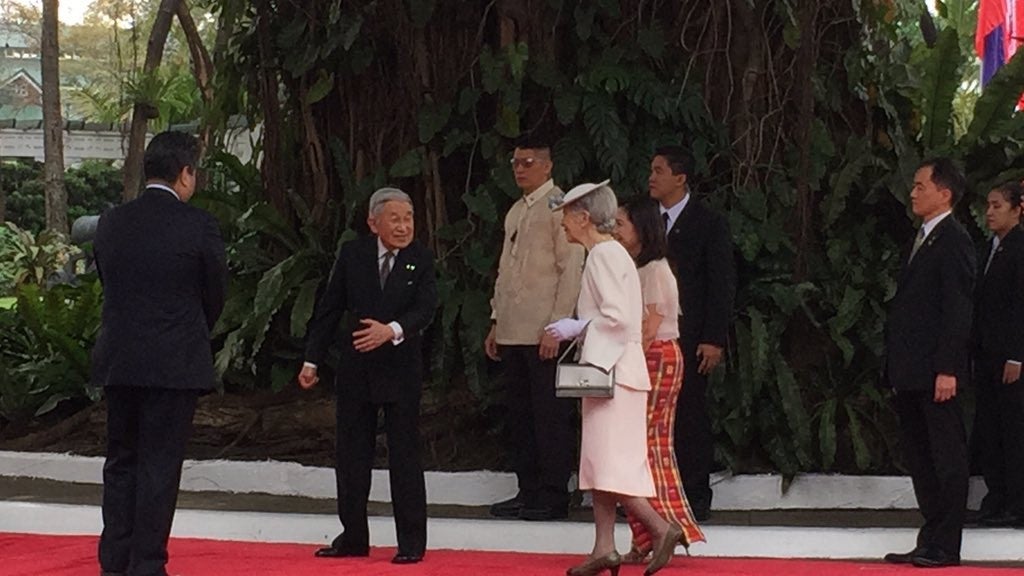 Japanese Emperor Akihito waits for Empress Michiko after they are invited into the Malacañang Palace. KRISTINE ANGELI SABILLO/INQUIRER.net

Following a wreath-laying event at the Rizal Monument, the emperor and empress will grace a state dinner at the Malacañang’s Rizal Hall. The Loboc Children’s Choir has been invited to entertain the royal couple and the other guests during the banquet.

Akihito and Michiko arrived in Manila on Tuesday afternoon. Their visit marks the 60th anniversary of the normalization of diplomatic ties between the Philippines and Japan.

While Japan occupied the Philippines during World War II, it is not a strategic partner of and a major source of official development assistance to the country. CDG