The plane carrying the imperial couple landed at the Ages Aviation Center inside the Ninoy Aquino International Airport in Pasay City at 2:40 p.m.

The emperor and empress will be in the Philippines for five days to mark the 60th anniversary of the normalization of diplomatic ties between the two countries.

“The Philippines is deeply honored to welcome their Imperial Majesties, the Emperor and Empress of Japan on the occasion of their state visit,” Communications Secretary Herminio Coloma Jr. said in a statement.

“Their visit underscores the abiding friendship between the Japanese and Filipino people,” he added.

“As our country charts the path that leads to sustainable, inclusive growth we are fortunate that Japan is our steadfast partner and ally,” Coloma said.

Like the United States, Japan is a close ally and strategic partner of the Philippines. It is also a major source of official development assistance (ODA).

The emperor and empress will be in Malacañang on Wednesday for a welcome ceremony and a state banquet. They will also lay wreaths at the Rizal Monument and the Libingan ng mga Bayani, in memory of war veterans.

They will be meeting with various groups, including Japanese residents, on Thursday, before attending a reception hosted by the Japanese ambassador.

On Friday, Akihito and Michiko will visit the Japanese Memorial Garden in Caliraya and the International Rice Research Institute in Los Baños, Laguna.

They will be leaving the country on Saturday. 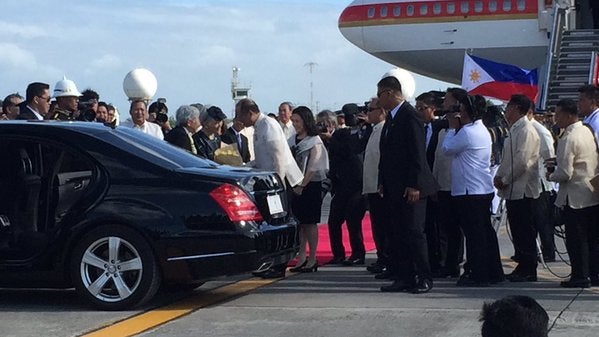