HIS THOUGHTS as he flew to Manila on a five-day “pacifist pilgrimage” were of the tens of thousands of lives lost—Filipinos, Americans, Japanese—in the battle for the Philippines more than 70 years ago.

While other visiting heads of state would have waved on arrival, Emperor Akihito and Empress Michiko solemnly bowed their heads as they walked out of Japan’s Air Force One after it touched down at Ninoy Aquino International Airport (Naia) Tuesday.

Akihito is now 82 years old and Michiko 81. He was only 11 when the war ended in 1945 with the obliteration of Hiroshima and Nagasaki by atomic bombs.

But the lapse of seven decades has turned Japan and the Philippines from bitter enemies to strategic allies, and Filipinos gave the emperor and his wife a rousing welcome on their arrival on board a Boeing 747-400 jetliner.

President Aquino with sister Pinky Abellada and members of his Cabinet welcomed the royal couple.

And as soon as the imperial couple’s feet touched Philippine soil, the band played the Philippine national anthem.

Mr. Aquino escorted the emperor and empress through an honor guard and to a waiting car that brought the couple to the Sofitel Philippine Plaza Hotel.

There at the hotel lobby, the royal pair were greeted by Japanese children waving small flags of the Philippines and Japan.

The royal pair launched their tour apparently with memories of the bitter war.

In Tokyo as the imperial couple left, Akihito said his nation must remember the tremendous loss of life in the Philippines during World War II.

“Many Filipinos, Americans and Japanese lost their lives in the Philippines during the war,” the emperor said before departing. “Especially in the battle in Manila, a tremendously large number of innocent Filipino civilians were victims. Upon making this visit, we need to bear this in mind at all times.”

The 1945 battle for Manila between the Japanese and US and Philippine forces leveled the capital city.

Akihito will pay his respects at memorials for both the Philippine and the Japanese war dead during his Philippine trip.

Akihito is the son of the late Emperor Hirohito, under whose name Japan waged World War II.

Akihito’s role is symbolic and he holds no political power. He is relatively popular with the Japanese public. His wife Michiko was the first commoner to marry into the Japanese royal family.

Japan-Philippines relations have improved dramatically in the decades since the war. Japan has become a major aid donor to the Philippines, and the two countries are developing defense ties in the face of China’s military rise.

The emperor’s trip to the Philippines follows visits to the World War II battle sites of Palau last year and Saipan in 2005. He also prayed for Japanese and US war dead in Iwo Jima in 1994.

The Philippines is the latest stop in the soft-spoken emperor’s so-called “pacifist pilgrimage,” which has appeared to contradict his government’s nationalist bent.

The emperor and empress have previously journeyed to other Pacific battle sites where Japanese troops and civilians made desperate last stands in the name of Hirohito.

On visits to Saipan in 2005 and Palau, Akihito and his wife prayed not just for the Japanese soldiers and civilians who perished, but also colonial subjects and troops from the United States. 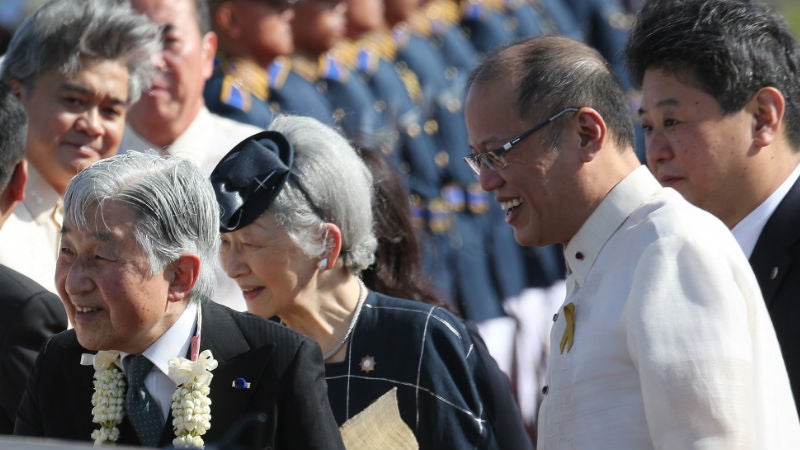 VISITING ROYAL COUPLE Japan’s Emperor Akihito (left) and Empress Michiko (middle) are welcomed by President Aquino upon their arrival at the airport for a five-day state visit. JOAN BONDOC

In remarks at a memorial marking the 70th anniversary of Japan’s 1945 surrender, Akihito expressed “profound remorse” for the war fought in his father’s name, reportedly the first time he used those words at the annual event.

In the Philippines the imperial couple will also visit a Japanese language training center and the International Rice Research Institute.

Akihito’s trip is being held to celebrate 60 years of diplomatic relations between the Philippines and Japan.

The two nations have also drawn closer in recent years as they have struggled to deal with similar territorial rivalries with China.

However, not everyone in the Philippines has welcomed the closer ties.

Filipino women who were forced into sexual slavery by the Japanese military have vowed to hold protests in Manila during Akihito’s visit.

They believe the Japanese government has never made a sincere apology or offered adequate compensation for the war crimes.

In the next four days, the emperor and his wife will attend events in Manila and Laguna province, including a state banquet to be hosted by Mr. Aquino in Malacañang.

On Thursday, the royal couple will meet former Japanese students and trainees at San Diego Garden in Intramuros and Japanese residents at the Sofitel.

Akihito and his wife will head to Caliraya, Laguna, for wreath-laying rites at the Japanese memorial garden on Friday.

Two months ago on the sidelines of the Asia-Pacific Economic summit, Abe and Mr. Aquino struck a deal on principle on the transfer of defense equipment, a step forward in enhancing the two countries’ military ties under its strategic partnership.

Under the new deal, Japan will provide military hardware and technology in the hope of further strengthening Philippine coastal defense. With reports from AP and AFP