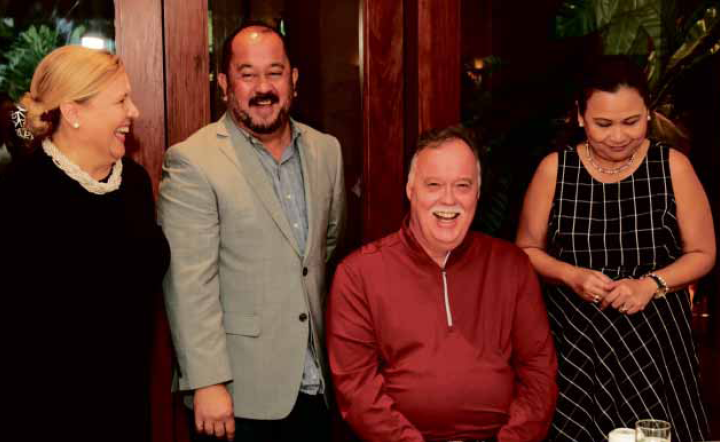 “Nagugutom tuloy ako (I’m getting hungry),” he said, grinning. “I grew up in Lucena where we always enjoyed a lot of seafood. Also, tapang usa (cured deer meat) from the mountains that is prepared by the Aetas.”

“Tapa from Quezon is really different. It has that smoked and sundried flavor. We also grow vegetables. Do you know pakô?” he asked dreamily, referring to the humble vegetable fern usually added to salads.

Enverga flew to Manila last month for two things: to attend his sister Dulce Abcede’s 50th wedding anniversary celebration, and to distribute donations worth P500,000 in cash and kind to local charities selected by a Canada-based nonprofit organization he founded five years ago.

Called the Philippine Canadian Charitable Foundation (PCCF), the group is now run by a board of directors and has his wife Rosemer as executive vice president. Enverga has been inactive in the foundation since he received his appointment as senator of the province of Ontario from Governor General David Johnston in 2012.

Enverga, the first Philippine-born lawmaker in the Canadian parliament, purposely kept a low profile when he arrived last December.

“I’m in hiding,” he said in jest.  “When you get so many invitations, it’s so hard to refuse.”

Besides, the 60-year-old senator wants to focus on the task at hand, which is to make sure that PCCF’s beneficiaries get their share from the P500,000 in net ticket sales raised from various charity events.

The PCCF chose the Elsie Gaches Village orphanage in Muntinlupa City, Tahanang Walang Hagdan in Cainta, Missionaries of the Sisters of Charity in Tondo and Aklan, Don Bosco in Makati and

Back in Toronto, the PCCF regularly sends assistance to the Archdiocese Filipino Catholic Mission and Answering the Cry of the Poor (Ancop) that has Filipino-Canadians among its officers.

Ancop has been instrumental in the building of houses for the poor in the Batasan area in Quezon City, Daet in Camarines Norte and Yolanda-stricken Tacloban City in Leyte.

Enverga and Rosemer were with a group of Filipino-Canadians who visited Canadian Ambassador Neil Reeder in his official residence in Makati in mid-January.

In a huddle with Inquirer Lifestyle, Reeder hailed Enverga’s rise from an ordinary mailroom employee in the Bank of Montreal to becoming one of its project managers.

The ambassador said Enverga is a good example of an immigrant who embraced flexibility and openness in order to survive in a foreign country.

Reeder noted that in many cases, an educated foreigner arrives in Canada armed with a college degree and immediately expects to land a job he studied for.

“You might not get the job that you trained for in the Philippines. You’ve got to be ready for two to three years of transition while working in other areas until you get (the job that) you want.  You might get back to technical-vocational studies or specialized training because your credentials (earned in the Philippines) might not always be recognized,” the ambassador said.

Enverga finished a bachelor’s degree in Letran College and was already employed in the clearing division of a Bank of the Philippine Islands (BPI) branch in Makati when he flew to Canada in the early 1980s at the invitation of his sisters who already settled there.

When he left Manila, Enverga was engaged to Rosemer who was a teller in BPI.

“It was a challenging time.  Every time I applied for a job, the employer asked whether I had job experience in Canada. Sometimes it was frustrating.  I was only 28 then. My sisters pictured a bed of roses. Instead, I found a bed of snow,” he recalled.

Enverga eventually found an entry-level job at the Bank of Montreal’s mailroom and worked his way up.

Along the way he completed a Masters Certificate in Project Management from the Schulich School of Business at York University and a Computer Studies Certificate from Centennial College.

He also returned to Manila, married Rosemer and took her to Canada.

The Envergas have three children. While husband and wife have always been involved in community work, Enverga said he was “shocked” when he got word that then Canadian Prime Minister Stephen Harper recommended him as senator.

(Ambassador Reeder said the Canadian government appoints its senators unlike in the Philippines where people elect them.)

Enverga remembered how incredulous his family was. “Why you?” Rosemer asked.

“I haven’t really aspired to be anything. At best I thought I would be appointed to the immigration board. Although, I was always in contact with the government because we sought advice about community issues.  I asked the prime minister’s office to give me 24 hours,” Enverga said.

Supporters believe Enverga’s efforts to bring medical missions to the Philippines, his initiatives to provide scholarships to seminarians and raise funds for school buildings in Lucena might have brought about that blip in the Canadian government’s radar.

Enverga now sits in the Canadian Senate’s committees on aboriginal affairs; agriculture and forestry; and social affairs, science and technology.

“They wanted me to be a member of the banks committee but I’ve had enough of that. I want to learn new things,” he said.

Last year, Enverga introduced a measure establishing the Rouge National Urban Park that would allow easy access to 58 square kilometers of forests, meadows, wetlands and farmlands to the 7 million people in the Greater Toronto Area.

Enverga said the bill ushers the first time an urban national park is created in Canada and provides legal framework “for a completely new approach to urban conservation.”

The senator takes pride in noting that Filipino-Canadians are among the “most assimilated” among ethnic groups now thriving in Canada.

“We don’t form (exclusive) neighborhoods, we assimilate very, very well. They have Chinatown, Indian town, Korea town… Filipinos don’t have that. We only have street festivals. After that, we go back to our lives. Also, Tagalog (Filipino) is the fastest growing language in Canada now,” he said.

Reeder noted that the Philippines is now “the largest source of new Canadians.”