‘Snowzilla’: Blizzard blankets eastern US; worst is yet to come | Global News

‘Snowzilla’: Blizzard blankets eastern US; worst is yet to come 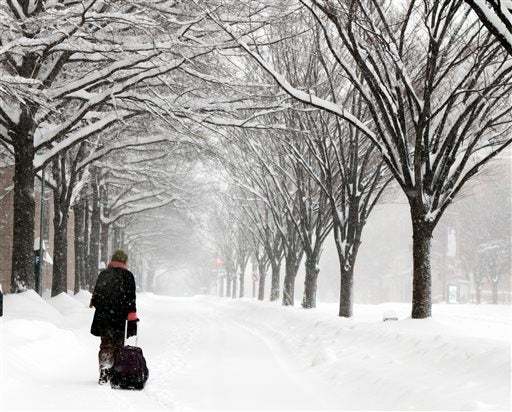 Michelle Navarre Cleary pulls a bag as she walks on K Street in Washington on Saturday, Jan. 23, 2016, as snow continues to fall. With long lead time from forecasters and stern warnings from authorities, tens of millions of residents from northern Georgia to New Jersey shuttered themselves inside to wait out a mammoth storm that made travel treacherous and could dump 2 feet or more of snow in some areas. AP

WASHINGTON—A deadly blizzard with bone-chilling winds and potentially record-breaking snowfall slammed the eastern United States on Saturday as officials urged millions in the storm’s path to seek shelter, warning the worst was yet to come.

US news reports said at least eight people had died by late Friday from causes related to the monster snowstorm, which was expected to last until early Sunday.

Forecasters predict the storm could dump more than 61 centimeters of snow in Washington, DC, and the surrounding area by late Saturday, bringing life to a wintry halt as residents ride out the rough weather.

“The real teeth of this #winterstorm will be after midnight thru early Sat afternoon. Heavy snow, increasing winds, lightning threat,” the National Weather Service (NWS) tweeted.

A blizzard warning was in effect for a large swath of the eastern United States from Washington up to New York.

The storm was expected to affect 85 million Americans, about one quarter of the inhabitants of the United States. Before it’s all over, it could cause more than $1 billion in damage, NWS officials said.

Several southern states, meanwhile, were already hit by snow and sleet unusual for the region with tens of thousands without power.

The storm developed along the Gulf Coast, dropping snow over Arkansas, Tennessee and Kentucky on Friday. On the East Coast, warm, most air from the Atlantic Ocean collided with cold air to form the massive winter system, NWS meteorologist Frank Pereira said.

By early Saturday, snow was steadily falling on southeastern Pennsylvania, including Philadelphia. The storm was forecast to head north toward New York City later in the day.

The Washington and Baltimore metro areas were expected to bear the brunt of the storm. Sixty to 70 cm of snow were likely, accompanied by winds of 48 to 80 kilometers per hour, before the storm wound down on Saturday afternoon, according to the NWS.

A state of emergency was declared in Tennessee, North Carolina, Virginia, Maryland, Pennsylvania, the District of Columbia, New Jersey and parts of other states.

Blizzard warnings or watches were in effect along the storm’s path, from Arkansas through Tennessee and Kentucky to the mid-Atlantic states and as far north as New York.

As far south as Atlanta, people were urged to go home and stay there. 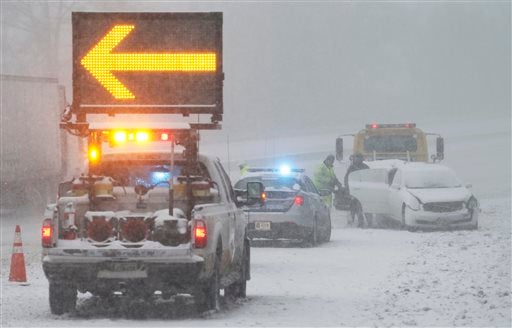 On Friday, frantic shoppers emptied grocery store shelves in preparation for the storm, dubbed “Snowzilla”—after the movie monster Godzilla—by some US media, and schools and government offices in Washington were all closed.  White House spokesperson Josh Ernest said President Barack Obama would hunker down at the White House.

“I think it’s going to be a disaster,” Sharonda Brown, a nurse, said as she waited for an Uber car with a full cart of groceries at a Washington supermarket stormed by shoppers.

Crews were out clearing the roads throughout the US capital, while others turned to shovels.

Among them was 28-year-old William Duren, who was clearing a sidewalk outside a downtown Washington hotel.

“Usually when we see snow in the forecast, it turns out to be only an inch or so. They always exaggerate on TV,” he said, before adding that this time, the forecasters appeared to be right. 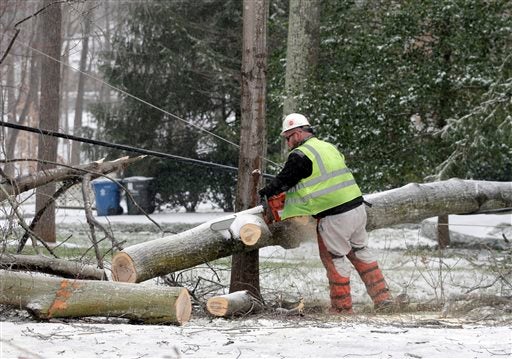 Several thousand flights were canceled on Friday and Saturday because of the storm, while officials in Washington took the unusual step of closing down the city’s rail and bus system from Friday night until Monday morning.

The Metrorail, the second busiest underground train network in the United States after New York, serves about 700,000 customers a day in Washington, Maryland and Virginia.

“I want to be very clear with everybody. This is a major storm,” Washington Mayor Muriel Bowser said as the city braced on Friday for what could turn out to be one of the worst storms in its history. “This has life-and-death implications and all the residents of the District of Columbia should treat it that way.”

If the blizzard leaves as much snow in Washington as forecast, it could surpass a record set in 1922 by a storm that dumped 71 cm over three days and killed 100 people after a roof collapsed at a theater.

Nearly 95,000 people were without power in the state, emergency officials said on Twitter.

CNN reported that nearly 133,000 were without power across the Southeast. Reports from AFP, AP