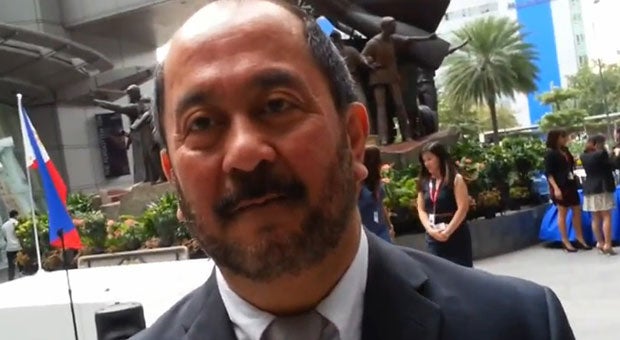 “I went to Canada for adventure, I took a chance,” Senator Tobias Enverga Jr. shared with INQUIRER.net in an interview January 24, while he was in the country leading a Filipino delegation of “winter escapees” from Canada.

“I never realized I will be a Canadian Senator,” he told the 240-strong delegation, mostly composed of Canadians of Filipino descent, that toured Kalibo, Boracay, Roxas City, Iloilo City, and Guimaras from January 18 to 23 as part of the first “Winter Escapade” tour.

Enverga was born to a middle-class family in Lucena City. He shared that there were two clans of Envergas in Lucena, one was mostly composed of politicians and the other was mostly educators. “I’m part of the educators,” he said.

During college, he went to the Letran College in Manila where he graduated with a degree in Economics. He worked for less than a year in two banks in the country after he graduated.

He met his wife there in the bank, Enverga recalled. He however said that he felt “tired” about being in the Philippines.

“I got so tired about being here in the Philippines,” Enverga said. “When you are a young man you have so many things going on in your life.”

It was then that he decided to go to Canada to stay with his sisters even though he was not sure whether he would get a job there. He had told himself then that he would just be in Canada for a couple of years.

“My start in Canada was good because my sisters took care of me. But eventually I realized that I have to do some work,” Enverga said.

Starting from the bottom

Enverga applied for work at the Bank of Montreal, one of Canada’s top five largest banks, where he started from the bottom of the corporate ladder.

“The first work I did was actually in the mail room… then I worked my way up,” he said.

“Then I took up computer courses and became a computer operator,” Enverga said. He continued to rise up through the ranks and his last position before he became a senator was project manager for the IT department

He worked for around 30 years in the Bank of Montreal. “I have a loyalty award,” Enverga said with a laugh.

Even though he has already reached top positions, he saw himself as among the millions of OFWs all over the world.

“I consider myself as an OFW. When I was working I send money to my mom through remittances,” he recalled.

“My younger brothers were still young and my father died earlier so I have to send a little money although my other sisters sent more,” he said.

In 2010, the Toronto Catholic District School Board appointed him as a trustee “which made him the first Filipino-Canadian elected to public office in the city and the first member of a visible ethnic minority elected to the Board.”

From there he involved himself in many socio-civic organizations such as Global Filipino Nation, Global Filipinos Canada, Canadian Multi-cultural Council—Asians in Ontario, Philippine Independence Day Council (PIDC), and Philippine Canadian Charitable Foundation (PCCF).

He held top positions, and in some cases was the founder, of many of those organizations.

“I have to put them together to ensure that we are well connected and to get all the good stuff from the government, that’s how I got to know the government,” he said.

For his advocacies and work in the many charitable organizations, Enverga was among the awardees of the Queen’s Diamond Jubilee Medal, a medal created in 2012 that commemorates the 60th anniversary of Queen Elizabeth II ascension to the throne.

The award is given to people who “have made significant contributions to Canada or to a particular province, territory, region or community within Canada, or for an outstanding achievement abroad that has brought great credit to Canada.”

In Canada, senators serve until the age of 75, which means he has around 20 years left as a senator.

He recalled that he was so shocked after receiving a call from the Prime Minister that he had to ask to be given 24 hours to think over the “life changing decision.”

“The beauty about being appointed is that we can say no to whatever the government says. There’s no partisanship. You know how it works for politics, if you’re in this different political frame of mind you always go against the other one,” Enverga said.

“Ours is not, we are the free thinkers. We are called the second sober thought of Canada,” he said.

When asked whether he heard about recent controversies in the Philippines, such as the billion-peso Priority Development Assistance Fund (PDAF) scam, popularly known as the Pork Barrel scam, he said that more accountability and transparency are needed.

“I’ve heard about it. If only they will apply more accountability, transparency, great reporting, I think that will be a big help,” he said.

Offer to the world

As one of the almost 10.5 million Filipinos that are abroad, Enverga said that the present diaspora of Filipinos to all over the world was a good thing because Filipinos have so much to offer.

“Leaving the Philippines is a good thing, but of course it’s a bad thing too, because it’s more like a brain drain for us,” he said.

Filipinos are “also leaders of the world,” he said.

Asked what he would tell the millions of OFWs all over the world, Enverga said: “Keep on going, do some more adventures like me and maybe you’ll find the right path eventually.”

Actress in no mood to ‘remember’ commitment