Beijing misses out on K-Pop 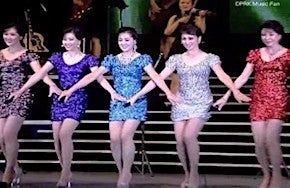 SAN FRANCISCO–Arguably nobody knows more about the unpredictability in dealing with North Korea than China. Even so, Beijing was caught by surprise by the latest flap.

Moranbong, the 21 all-girl band organized and each member personally selected by dear leader Kim Jong-un and named after the peony peak in the Hermit Kingdom, was to perform in Beijing for three successive days as part of a high-profile culture exchange.

On Saturday, December 12, early in the afternoon of the first day of the band’s scheduled engagement, the band members abruptly left their hotel and went to Beijing’s Capitol Airport where they boarded a North Korean passenger liner and went home. They left in such haste that not all their personal luggage went with them. Needless to say, the performances were cancelled.

There were no public announcements or explanations from the North Koreans or from the officials in Beijing. Instead, the public was left with an assortment of rumors and speculations.

One of the allegations was that Kim objected to the intense interest the local Chinese media paid to Hyon Song Wol, the leader of the band said to have had an extramarital affair with Kim. Such attention was regarded insulting to the dignity of Kim. An older rumor, clearly untrue, was that the dear leader had her executed after he came to power.

Another, along the frivolous line, was supposedly that the Chinese officials had asked the song troupe to skip performing songs with patriotic and revolutionary themes such as songs that salute the dear leader. Again, the dear leader was insulted, leading to the sudden termination.

A more complicated narrative of the developments that led to the abrupt about face was that Kim had originally viewed the cultural exchange as a step to initiating discussions for Kim to pay a state visit to Beijing. The Beijing side demurred which naturally hurt Kim’s pride.

Of course, Beijing had its reasons for being displeased with Kim when North Korea announced that it now has the hydrogen bomb in its arsenal. This was not exactly music to Chinese ears and they had to wonder if the disclosure on the day the song troupe was entering China was Kim’s way of thumbing his nose at Beijing.

Kim supposedly went ballistic and ordered the prompt departure when he found out that only low-ranking officials were slated to attend the performances and that China’s president Xi Jinping and premier Li Keqiang along with other senior officials would be absent.

Not known is whether the downgrade of the audience to the invitation-only event was Beijing’s way of expressing their disapproval of the surprising hydrogen bomb announcement or whether the senior ranking officials were simply not fans of the North Korean version of K-Pop. 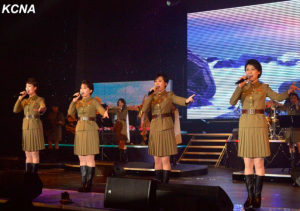 In response to the sudden departure of the performers, Beijing sent 2,000 soldiers to the North Korean border as a precautionary measure.

According to the South Korean press, after the performers’ return, over 100 ethnic Chinese living in Pyongyang were arrested and interrogated for possible espionage activities on behalf of China. The movement around the capitol by China’s ambassador to North Korean was also put under surveillance.

Instead of building warmer relations between Pyongyang and Beijing, the withdrawal of the Moranbong troupe has accomplished just the opposite. The relations are now more strained than ever.

Kim Jong-un came to power in December 2011 after the death of his father. He has yet to meet China’s titular leader, Xi Jinping, and this must grate in the mind of the supreme leader—especially so, since Xi has met South Korea president Park more than a half dozen times.

The erratic and impetuous behavior of young Kim—he will be 33 next January—has not endeared him to China, but he clearly believes he can continue to stretch the limits of bilateral relations.

As I said before, it would take a tri-party alliance between China, South Korea and the U.S. to deal effectively with North Korea. So long as Kim sees his relationship with China as “lip and teeth,” or more importantly so long as China is stuck with the lip to counter the US/South Korea military treaty, Kim will continue to vent his frustration on his only ally.

So, Beijing’s loss was that they missed 21 comely young women in modest just-above-the-knee skirts performing their answer to K-Pop popularized by South Korea. The North Korean version includes strings, guitars, synthesizers and percussion to unambiguous beat.

In one of those ironic coincidences that could not be orchestrated, a real South Korean, all girl K-Pop band, “Oh My Girl,” were detained at the Los Angeles International airport as suspected sex workers about the time the North Korean troupe was in Beijing. After 15 hours in detention, the band promptly flew back to Seoul. Thus, America also missed out, in this case eight young girls, probably more provocatively dressed, prancing on stage.

Dr. George Koo recently retired from a global advisory services firm where he advised clients on their China strategies and business operations. Educated at MIT, Stevens Institute and Santa Clara University, he is the founder and former managing director of International Strategic Alliances. He is a member of the Committee of 100, the Pacific Council for International Policy and a boat member of New America Media. The above essay originally appeared in Asia Times.